After the elation of Tuesday night, after giving everything to qualify to Rio, then even more to record the historic bronze medal, it was one full round of competition too far for Amy and Ruby to hit to their best ability last night.

A completely new experience for both girls, for Ruby a seasoned competitor, and Amy new to the format  World Championships bring, the historic achievement of winning Great Britain’s first team medal then settling down and coming calmly back to competition two days later was unknown, untested, and perhaps a little much this time round.

Imagine the melee that will have surrounded these gymnasts after Tuesday night, not only their own excitement, that of the entire team,  coaches, friends, family, and at a home championships even more fan attention than they will encounter in Rio. Media interest that previously only Olympic Games  will have brought , a late night after the team final, the excitement of watching the men secure silver the night after, again not leaving the arena till later, then ready? Compete.

Amy said she hadn’t really slept much since the team final and it is easy to understand why. None of this is to make excuses, but rather to offer a fair starting point from which to assess the AA performances, and to understand why both gymnasts commented that lessons will be learned for Rio should the same success be achieved. The American girls do this year in year out, team final gold, AA hit performances, they’re used to it, used to the process, lets hope we become so successful that it becomes second nature to our gymnasts too.

To the roar of the Hydro, Amy and Ruby were presented, saluting the audience, ready for bars. Amy fittingly in pink, Ruby in magenta.

Ruby up first, another hit bar routine for her, strong swing, secure in the complex transitions. Maloney to Bhardwaj, Van Leuween back to high bar, linked to the Zuchold immediate toe on full. Back to the high bar, toe half, good jaeger, then finished with a double front with the tiniest foot shuffle forward. The toe full was a little late today, and there are leg separations on transitions which can be tidied up, but three bar routines, three hits in Galsgow for Ruby, just one to go in the final on Saturday.

No video of Amy’s bars as yet, unfortunately she fell on her new Markelov which has been completely secure every time she has performed it up to this point. A huge shame, as the rest of the routine it seems went very well given the score. 13.033 with a fall would have put her over 14 for a hit routine which would have been her highest score to date. 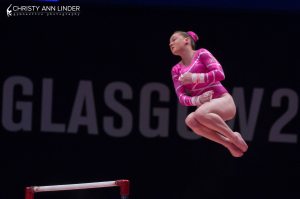 On to  beam next, after such solid performances in qualification, it was not to be today.  Amy was a little short in terms of hitting position on her split full, but brought the landing under control with just the smallest adjustment.  On the big acro series, the hugely difficult gainer layout layout, her front landing foot slipped from the beam making it impossible to save, and taking her onto the mat.  Amy recovered well with an excellent free walkover, then change leap to sissone. No problem on the change half, although again she will be looking to increase the split position here, then a great standing tuck without a waver. Amy fought well to bring the free cartwheel under control, the stuck her excellent triple full dismount.

Not the routine she would have wanted. A fall, and she did take a 0.3 hit to her D score today, but demonstrating exactly the right attitude in responding to the fall so well by regaining her composure and fighting hard for the rest of her routine.

Ruby started convincingly, aggressive and committed in the opening choreography, then beautiful change leg to sissone. She had a tiny dip in the shoulder after the change half, but dealt with it firmly. High punch front, with a small loss of balance at the end quickly covered, she was going well. The video of the illusion turn cuts away, but Ruby did lose control coming out of it resulting in an extra quarter turn and a wobble, nothing major though.

The problem for Ruby came on the flick layout which didn’t seem to really lift as she was low coming in, tried to get the chest up quickly, and came away from the beam. Such a shame as she was going so well. Great recovery with the free cartwheel, and change to ring, but a low landing on the double back dismount would have given her deduction for both the chest position, and the pace forward she needed.

After a disappointing start, Amy moved to floor and hit her routine well. Maybe not her absolute best, not as sharp as Tuesday night, but a great performance and exactly what she needed to bounce back. Big double double opener, just a pace back out of the floor. Double layout secure, a hop back, but inbounds. Through the change leg to split full passage joined to the Popa and straddle quarter. Amy smiled her way through her choreography, selling the routine, and putting in a real performance as she always does on this piece. She had a couple of steps from the one and a half to two and a half, then a hop back from the double pike, but kept both in bounds.

Ruby opened with a high double Arabian, a little over rotated causing her to take a large step, but she kept it within the floor area. Straight from double twist with excelent form from the handspring, a smaller pace to keep it under control. Really strong leap series of change to ring into tour jete full, complex, hitting great positions, and well controlled. Clean one and a half to front full, a little slip back on landing, Lovely change half then Y spin, Ruby really does have such great form on all her dance elements. High double tuck which she maybe held on to a little long casing her to land upright but with her chest down, and therefore need a large step to control it at the end.

I don’t know whether Ruby is planning to change this routine for next year and the run up to Rio, as she has been performing it for some time now. If she does I’ll miss it, it’s so well choreographed, suits her aggressive positive style so well,  and is so well performed. The only positive from changing it will be to see what she comes up with next, as you know it will be good!

No vault video for either gymnast, but we know that both competed their double twisting Yurchenkos without major error. Amy scored 14.866, Ruby 14.233.  Neither hitting their highest score, but both finishing strongly.

At the end of the competition Ruby placed 22nd, and Amy 23rd. Not what they hoped for, and both have expressed disappointment, although also been impressively pragmatic. Amy noted that no matter what she was still in the top 24 in the world, the best way to look at it, as to get to that level takes so many years of work and dedication it is sometimes wise to look at how far you HAVE come as opposed to where you could have come.

Congratulations to both gymnasts and their coaches for a great effort after such a huge result. Amy is finished for this championships, and what a world debut she has had. She will return to the gym to begin preparation for the road to Rio. One fall today yes, but this young gymnast is a big occasion competitor and a great addition to the British team this year.

Ruby we will see in bars finals tomorrow, and wish her the best of luck! 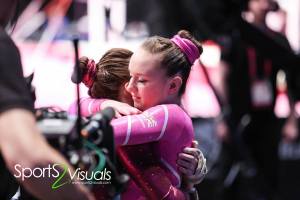