Five new gymnasts have been added to the GB senior squad for 2016, all have come from the junior ranks, and have represented Great Britain at junior level. In this first of five profiles, meet Georgia Mae Fenton. 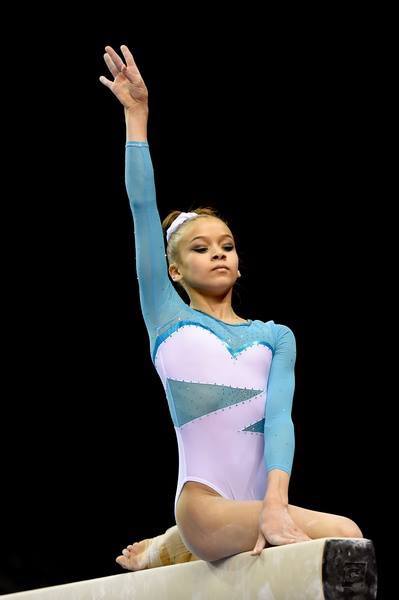 Georgia first made an impression by taking the 2013  English Espoir Championship AA title, as well as gold on bars, and silver on beam and floor. In 2013 there were two British Espoir Championships, in the first one at the beginning of the year, Georgia took the AA title, with the highest bars score, and third highest beam and floor scores.  At that time Espoirs were also required to compete a range and conditioning routine, Georgia also achieved the highest score on this event. Espoirs also got to compete at the main British Championships a few weeks later in any apparatus finals they had qualified for from the earlier AA competition, here Georgia placed 6th on beam, 5th on floor, and took the bars title with this routine.

Georgia was also selected to compete in the prestigious International Japan Junior in 2013.  She competed on two pieces, and did incredibly well to make the bars final finishing in 7th place against gymnasts up to two years older than her, many of whom as seniors have already represented their countries at the world championships.

In 2014 Georgia moved into the Junior ranks, and started the year competing on just bars and beam while dealing with injury. She placed first on bars at the English championships, and 7th on beam. She also competed the same pieces at the British Championships, making the final for both pieces, and finishing in 7th and 6th place respectively.

Georgia taking the bars title as a first year junior.

By September Georgia was back to competing all around, and led the English team to the School Games title, taking the AA, Vault and Floor titles, as well as the bronze on bars and beam. Her expressive floor was a real highlight of the competition.

Georgia finished her year with a very sucessful competition at the Pas de Calais International where along with Angel Romaeo she took the team title. She then went on to take the Junior all around title, and the combined junior and senior bars and beam titles, as well as the silver on floor. Georgia impressed on beam as she does on floor, with attention to execution and presentation.

At the beginning of 2015 Georgia moved from Europa to East London Gymnastics Club, she competed at the English championships placing 9th AA, and taking the silver on floor with this beautifully chorreographed and performed routine.

Georgia then competed at the British championships taking the bronze medal all around, and was the only gymnast to stop Catherine Lyons making clean sweep of all titles, by winning gold on bars with this routine.

Georgia was selected for three international events through 2015. She was part of the silver medal winning team, and took the AA bronze at the FRA-GBR-SUI Junior Friendly. She was also selected for the FIT Challenge where she placed 5th with the team, and the European Youth Olympics where she placed 7th with the team. At the four way GBR-ITA-BRA-GER competition, Georgia placed  1st with the team,  3rd in the AA, as well as taking the top spot on bars, and second on beam.

Georgia on Beam at the GBR-ITA-BRA-GER Competition

As you can see. Georgia is a very stylish gymnast with excellent extension, expression and presentation to her work. She is particularly impressive on bars too, where she swings with great shapes, using the bounce of the bars, and has excellent positions in handstand. The straight line from wrists to feet made with open shoulders and hips, plus neutral head position which Georgia uses so well, is what makes bars easy, well, easier!

Georgia is a slight gymnast, so has struggled more with her tumbling and vault difficulty in that she hasn’t been able to generate the power she would like as yet. That said, she has posted a couple of videos recently showing some potential tumbling upgrades she is working on that suggest the extra strength which will lead to higher difficulty is coming.

Good luck to Georgia in her first year as a  senior!