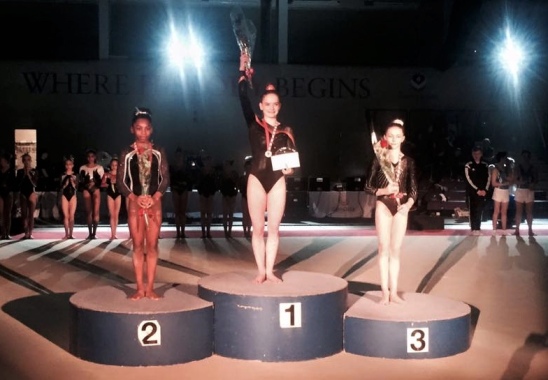 The final competition of the busy weekend in Loughborough saw the juniors in action, and it was a great competition coming down to the final piece for the title.

It was a rostrum of junior European squad gymnasts, with second year junior Alice Kinsella of Park Wrekin taking the title ahead of first year Taeja James of City of Birmingham, and second year  Lucy Stanhope of  Liverpool taking the bronze.

Having not been able to watch the first round, I also missed the first rotation of the second round, and was able to keep track of the action from the second rotation onwards. This meant I missed Alice on vault, and Lucy on bars.

Alice scored 13.90 for her full twisting Yurchenko, Lucy started on bars with 12.850

Taeja began her challenge on vault with a full twisting Yurchenko for 13.95.

Alice then went to bars, toe half to Jaeger, toe full, and this time she caught her Pak salto having struggled with it the last couple of times. Toe on, the Maloney to high bar, toe on again, and into the double layout. After a couple of difficult outings on bars, Alice looked delighted to have made her new upgraded routine. 13.20 (5.6 D, 7.6 E)

Lucy was on beam, and looked so much more confident  in her performance here than she did a week ago. Flick to chest stand mount,  then a very well performed full twisting flick. Great flick layout flick series, then free walkover, change leap to ring leap, and a change to ring which she may not have quite got today just dropping her D score. Finally flick to one, flick to two double twist, and scoring nearly a whole mark higher than last week.  13.250 (5.0 D 8.20 E)

Taeja went to bars, and hit a very strong routine. Blind in to Jaeger, toe on then Tkatchev, shoot half, toe shoot back to high bar, giant full, full out dismount. Dynamic and clean work throughout, for 13.30 (5.1 D, 8.1 E)

Next rotation, Alice on beam, opening with a flick to chest stand, then double spin just a tiny bit over rotated which she corrected well. Good change to change half, then the free cartwheel layout which she does so well. A big wobble today, but very well fought by Alice, she absolutely was not coming off. She went for the connection with the sissone to free walkover, it wasn’t there today, but no issue on either skill. Finishing with a very good two and a half twist with just a small hop, three pieces down, and going very well. 13.750 (5.6 D, 8.15 E)

Lucy went to floor, she opened with a double pike with quite a big bounce out, and a large pace back so some landing deductions for the E score panel. Change to ring to split full dance passage, then one and a half to double twist second tumble. Lucy went for a nice handspring full twisting straight front to stag leap for her third tumble, then finished with a double tuck with couple of paces on landing.  The landing deductions cost her a bit today, 11.80 (4.9 D, 6.9 E)

On beam, Taeja mounted with flick to chest stand, then a wolf turn. Change to change half, then the handstand to layout layout series. A small step after her front somi, sissone to W jump, free cartwheel. Taeja had a wobble on her side somi, but got it back under control, then finished with a good two and a half twist with just a small hop. 13.60 (5.5 D, 8.1 E)

For their final pieces, Alice and Taeja went to floor (Alice first as her group rotated ahead of Taeja’s) , and Lucy to vault. It couldn’t have been closer between Alice and Taeja, 40.90 to 40.80.

Taeja opened with a double tuck, she had a hop back, and possibly a pace out. Handspring straight front full, then hop full to split full dance passage. Change half leap, then one and a half to straight front for her third tumble. Double L spin, and finishing with a two and a half twist for 12.850 (5.0 D, 7.85 E). A total of 53.70 and the silver medal as a first year junior.

Lucy finished well, vaulting her full twisting Yurchenko for 13.60 to complete her competition with 51.50 to take the bronze.

Also competing AA but being Welsh taking part as a guest, was second year  junior Maisie Methuen. Maisie started on beam with change to sissone, flick layout layout, and a double spin which she may not have got today as her foot went back down behind her on the beam. Change to ring (looking at her D score I don’t think she was awarded this today), free walkover sheep jump, Onodi, and two and a half dismount. Good work for 13.650 (5.5 D, 8.15 E)

On floor Maisie opened with her dance passage change ring to split full, then big double tuck opening tumble with a couple of paces on landing. Double pike with a small pace, change quarter with an added half turn, and double spin to back spin. Handspring straight front full to stag leap, then finishing with a handspring double twisting straight front. 13.00 (5.1 D, 7.90 E)

Vault was Maisie’s highest scoring event, and the highest scoring piece of the day. A very high very clean handspring piked front half for a well deserved 14.150 (5.0 D, 9.15 E)

Finally bars, the upgrades she first showed at Gymnix this year going well for her, toe full, upstart handstand, Maloney to high bar into the clear circle to handstand linked to the Tkatchev. Shoot half, toe shoot back to high bar, blind in, top out, full out dismount. A job well done, 13.10 (5.1 D, 8.0 E) an AA total of 53.90 which would have placed her second in the main field.

What was very encouraging here looking ahead to the British Championships and the junior Europeans, is that all four girls went through sixteen routines without a fall.   On paper if no one upgrades and they all go clean, Alice is the favourite for the British title. That’s on paper though of course going by her higher D score only, we all know that anything can happen in competition.

The vault title went to Taeja, she performed her full twisting Yurchenko as mentioned above for 13.950, then a tucked Tsuk full for 13.40 to take the gold.

*Competing as a guest, Welsh and Academy gymnast Zoe Simmons scored 13.575 for her pike front half, and 13.50 for her tuck front half, for an average of 13.575 which would have placed her second.

Taeja also took the bars title with the routine described above, she is currently British Espoir vault and bars champion, and now junior English champion on the same pieces.

Alice took the silver having hit her new routine today

Megan Parker took the bronze with a hecht mount, toe half into Jaeger, shoot half, toe full, shoot back to high bar, long swing, full out. (5.1 D, 8.20 E)

The bronze went to Chiara Bunce of Heathrow with a beautifully performed routine for the highest E score of 8.350. Jump to split mount, flick layout layout, split jump, full spin, change leap to split leap, free walkover, and then just having to stop before the sheep jump, finally finishing with and excellent flick to one, flick to two, double twist.

*Maisie Methuen’s 13.650 on this piece would have placed her second.

Megan Parker took the silver with a split jump full, then opening with a triple twist, change ring to change half, double tuck, a beautiful Memmel spin, and a double twist to finish. A 4.9 D score, but a very impressive 8.6 E score in keeping with Megan’s very clean style of gymnastics.

The bronze went to Megan Splain of Sapphire, unfortunately for me, Megan went in the first round before I was able to watch, but clearly did very well here as she also finished 4th AA.

Some great work today, for some clean competitions, for others, especially many in their first competition of the year, there were  mistakes that they will hope to fix by the British Championships in a few weeks time. Congratulations to all gymnasts and coaches.