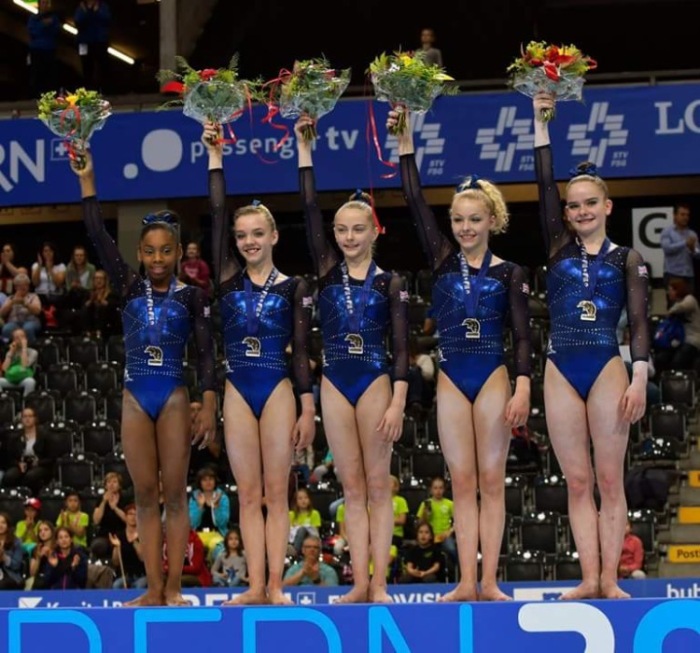 Two years ago going into the 2014 junior European championships, the British juniors had never won a team medal. Silver to Russia with the strongest generation of juniors Britain had produced, two now have world medals, two more are senior national squad members returning from injury. Was this a one off, or were we now one of the strongest European programs at junior level? Held every two years, the 2016 championships would give us the answer.

Firstly, before we get on to the performance of the team, what is hugely encouraging is that although only five could be chosen, there are another handful of gymnasts at home that could also of made this team. Three very strong juniors are currently coming back from injury, and another couple that were just piped to a place on the team for Bern. The strength of a program shows in it’s depth, and this is very promising for the future.

The girls that were selected went into the competition to fight for a team medal. Russia as I have already talked about in the preview post would be unbeatable should they hit, and they did. They have huge bars scores as we have come to expect, their D scores over three gymnasts were 2.4 higher on bars than GB who had the second highest, they were also as expected very clean here, three points higher in total.

So with Russia as expected taking the competition, it was a fight for the silver and bronze, with a small group of teams all capable of medaling. It was a pressure situation, whoever could hit would be successful. Four gymnasts up, three scores to count, the young Brits started on beam.

*Warning, the video quality is dire, I considered not using it, but for the moment it is all that there is. it’s taken from the live feed, so understandably poor. You can see what every one is doing, but just so you’re aware it’s like watching a bad VHS from 1982. I will of course replace it with anything better that pops up. 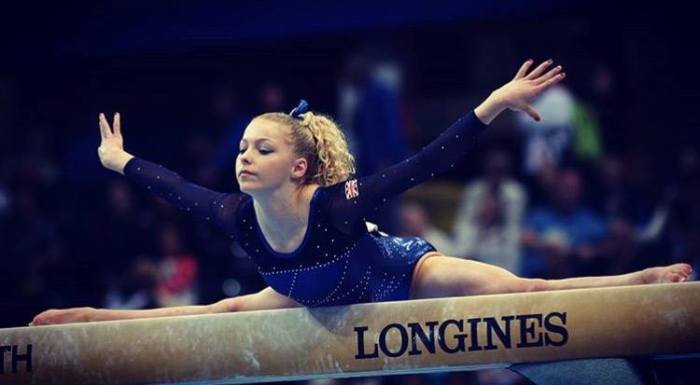 The feed started just into Lucy‘s beam, she went up first, and put in an excellent performance to start the team off well. We saw a great full twisting flick, confident and secure flick layout, free walkover with a tiny adjustment well controlled, then good range and extension in the leaps. Safely through the full spin, change leap with quarter turn, and finishing with a very neat and well executed flick to one, flick to two, one and a half twist.

Taeja had an infatuate fall on her flick layout, she usually does two layouts, and has been very solid on both, but not to be today. She recovered well to land her front then her side somis, and finished with an excellent two and a half twist dismount.

Alice hit a great routine,  a small adjustment on the double spin, then good change to change quarter leap. Rock solid on her free cartwheel layout acro series, a wobble on the free walkover, but nothing too drastic, then finishing with a strong two and a half with just a hop on landing. Great work, and well rewarded by the judges, with room to go even higher. Very impressive.

Maisie finished the rotation with another strong performance. Well extended leaps to start with, then and absolutely solid flick layout layout, beautifully finished with confidence. Tiniest adjustment on the double spin, then one of the best change to ring leaps I’ve seen her go for. She was a little off on the free walkover, so adjusted and paused before the sheep jump, then the same sort of adjustment on the Onodi. Two and a half with a pace, another great routine well rewarded, but again, she can go even better, and will have the chance to in AA and beam finals.

Megan went up first on floor, and the feed didn’t show her. What was lovely was to hear the crowd’s reaction when she finished, the applause indicating that European fans were treated to what we have seen so many times, beautifully expressive work with attention to form and detail. The third highest E score of the day, and place in the floor final was the reward, so we will see the routine on Sunday.

Taeja upgraded her opening tumble, and went for straight front into double twisting straight front. I have the feeling that she has several new tumbles almost ready, and we will be seeing them over the rest of the year. Great start with the new tumble, just a pace on landing. Big double tuck with a bounce back second tumble, but she kept it in the area. Very neat one and a half to straight front with a small hop, then finishing with a stuck two and a half twist. Taeja performed the dramatic routine really well, with confidence and commitment.

Maisie has changed the start of her floor, she’s added a double wolf turn, then goes into the corner for her first tumble. Maisie is kind of between tumbles at the moment if that makes sense,  she has the double Arabian there, and tried it last weekend, but went for the double tuck today, no doubt with safety in mind. Unfortunately for Maisie she had so much power on it that she had a big bounce back, and then a step back out of the area. It doesn’t sound too bad, but she probably lost about 0.6 on the one skill, which was reflected in her score. Good double pike, a pace back, but within bounds, then lovely dance passage of change to ring, through to tour jete half. Two good tumbles to finish, straight front full to stag jump, and straight front double twist, both from the handspring. Beautiful dance and performance quality as ever from Maisie, she’ll have a chance to go even better on this piece in the AA final.

Alice added to her great start on beam, with a fantastic floor performance. The lovely Memmel spin she opens with went round two and a half times, she then tumbled one and a half to two and a half twists, great form, great landing. Strong triple twist again well landed, tour jete half to change half dance passage. The double pike she landed a little low in the chest and bounced back, good double tuck with a small hop to finish. Again very well performed, and well appreciated by the audience, great to see the British gymnasts really focussing on the artistry in their routines. Alice also earned a place in the floor final for Sunday.

Half way there and the team was going well, onto vault……

We didn’t get to see Lucy vault, we got to see her run, but the feed was focussed on floor, and the vault was out of the picture. She would have vaulted her full twisting Yurchenko, and from her score she did well.

Maisie vaulted a piked front half for the team total. Good block, nice and high of the vault. Clean turn, and just the hop on landing.

We don’t see it, but she also went for a second vault. Maisie normally uses the piked front, and it seems she performed very well here for 13.566 (4.6 D, 8.966 E). her average of 13.716 wasn’t quite enough for the vault final, as there were gymnasts with higher difficulty.

Right now, I’m not entirely sure what happened with Taeja‘s vault. On the feed, she presented ran, and performed a perfectly good full twisting Yurchenko. She scored a 0.00. When this happens, there has been a technicality. Either the gymnast went before time, perhaps on the signal of the judges, but not when the go sign flashes. Or not quickly enough after being signalled to go. On Yurchenko vaults, if the safely collar hasn’t been used, but it was here.

From what we see, and look for yourselves, Taeja looks very calm, she is waiting quite a while, then vaults. If something had gone wrong beforehand, I wouldn’t have thought that either she would look so calm, or her team mates and coaches wouldn’t be right there talking to and encouraging her as she waits ( You can see  they are as she prepares for her second vault, after the zero score has come in). Everyone looks like everything is going smoothly. When she goes, the judges are standing ready to judge the vault, again everyone looking as if what is meant to be happening is happening, so I don’t think she took them by surprise and went before she should. So too early, to late?  She was waiting to present, then went, so did she go on the judges signal as she has always done, unaware of the time? I’m sure exactly what happened will come out, but it’s a huge shame, as she did two very good vaults, and looking at the scores, she had a change of sneaking into the final.

On to the final piece, Russia were way out in front, but there was everything to play for to secure a medal, and the British team went to bars.

Good start on bars from Maisie, safely through the routine. She had a couple of short casts, and was a little late on the toe full, but did her Maloney uprise clear circle to handstand well, then straight into the Tkatchev. Really strong shoot half landing right in handstand, shoot straight back to high bar, blind in, top out right on top of the bar, then a full out to finish her competition. Maisie just missed out on the bars final, and is currently first reserve.

Taeja put her disappointment on vault behind her, and did a great job finishing well for her team. Not shown on the feed, she clearly hit her routine without major error going by her score.

Alice finished a great day for her with another strong routine. Toe half into Jaeger, then tow full immediate Pak. Maloney to shoot half, a little leg separation, but very well controlled throughout. Shoot back to high bar, toe on, straight into double pike dismount. Interesting, as Alice has used the double straight for a while now, but double pike today, and a place in the bars final.

Megan finished off the competition for the British team with an absolute fight of a routine. Usually very smooth on this piece, it was just one of those routine where a few things didn’t go her way, but she was absolutely not giving up. Starting well with her customary extension, hecht mount, toe half, forward giant, Jaeger. She was a little short in the cast, then good shoot half, then had to fight the handstand in the toe full, but pulled it back so as not to fall.  Megan didn’t get the timing of her shoot to high bar right, so came to a near stop, but fought well to keep going, then pushed hard into her cast, and had to fight again to keep from going over. Lovely full out dismount to finish though.

So when the competition was over, the British team had finished in second place to Russia. A huge achievement, and every single one of the team had scores counting to the total that claimed the silver medal. A great start to 2016 Europeans for the British WAG, Alice and Maisie will contest the AA final with Alice qualifying 3rd, and Maisie 7th but with room to improve.

Apparatus finals for Alice on bars, Alice and Maisie on beam, and Alice and Megan on floor to look forward to as well.

Well done to gymnasts and coaches, a great performance, and well deserved result. 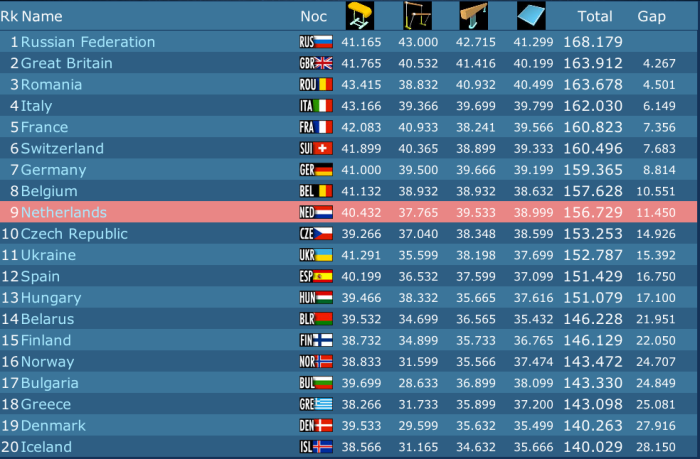 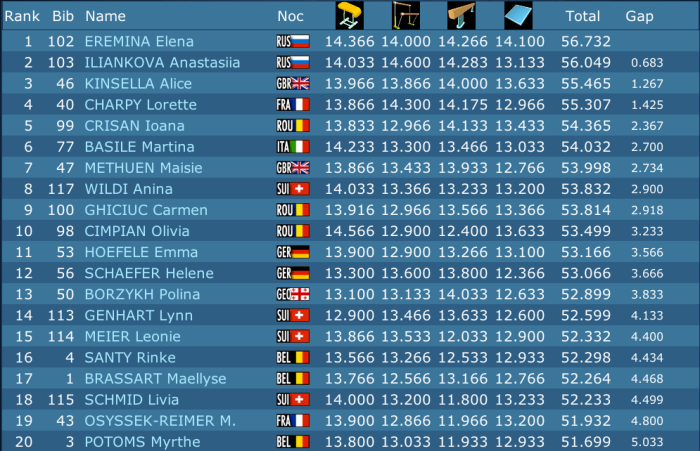 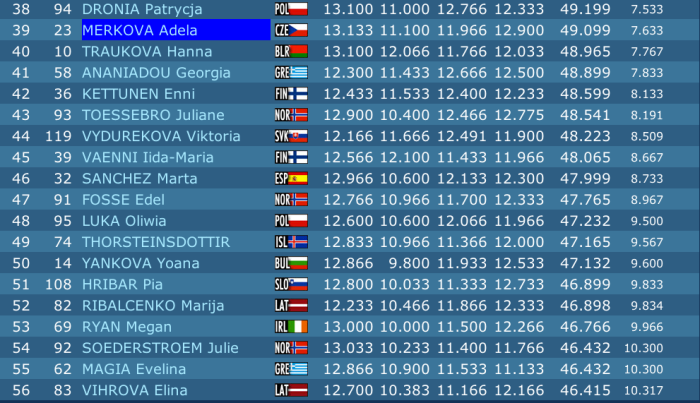 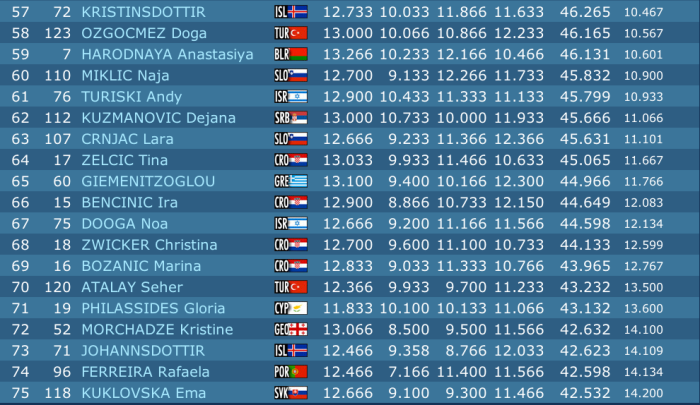 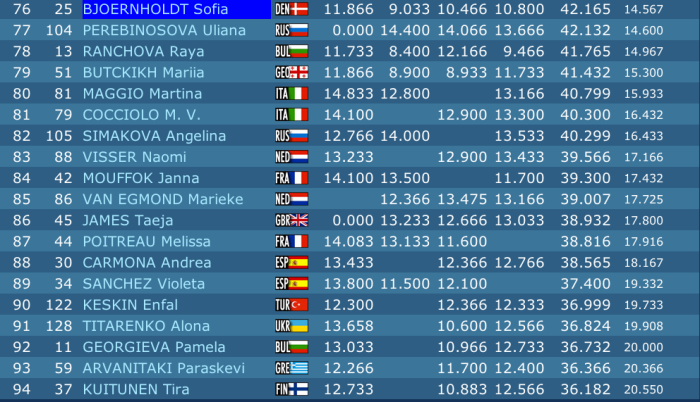 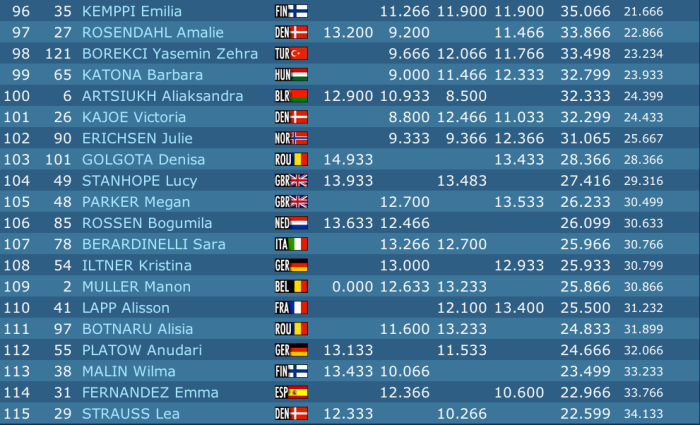