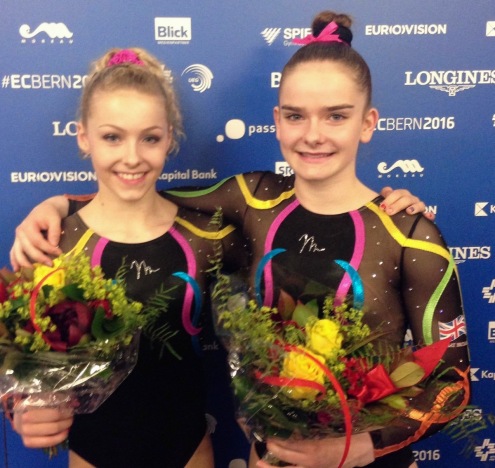 The third day of competition at the 2016 WAG European championships saw the juniors return once more, this time to contest the AA final. Two per country only from qualification allowed, Great Britain was represented by English champion Alice Kinsella who qualified in third place, and British champion Maisie  Methuen who qualified in seventh.

Alice started on vault, and Maisie bars.  Alice vaulted her full twisting Yurchenko, nice and high good form, and a small hop on landing.  Repeating her score from qualifications of 13.966, she was off to a good start.

Maisie had the same D score on bars as in qualification, but wasn’t able to execute her routine as strongly, losing 0.7 on her E score. No fall, but her score of 12.733 (5.3 D, 7.433 E)  was lower than she would have hoped for, and lower than her usual scores on this piece. She was a little late on the toe full, had a couple of short casts, a leg separation on the Maloney, a pause on the top out after her forward giant which she did well to bring under control again, then a large hop back on the dismount. No one major error, but it added up.

At the end of the rotation, Alice was in 3rd, Maisie 18th.

Starting her fight back on beam, Maisie put in a strong performance. Lovely start of split mount, back roll, then well extended change leap to sissone. The flick layout layout had great form, and was performed beautifully. Maisie finishes this skill so well, with lightness and confidence. She did very well on the double spin, as it went off line on one and a half rotations, and she managed to finish the skill with minimum issues. The change to ring went well, she seemed to land it, but then had a big wobble, so clearly wasn’t quite secure enough. The free walkover to sheep jump was much better today, as was a the Onodi. Two and a half to finish, good in the air, but a large pace, and a smaller pace. 13.600, (5.8 D, 7.8 E). I am absolutely willing Maisie to hit this routine in Sunday’s final, the judges clearly appreciate her work, as she is scoring well even with the errors. Not surprising, as she is elegant, poised, clean and fluid on this piece when it is going well. Looking at the scores, should she hit everything she could go as high as 14.40 here which would mean a medal, potentially the title. Come on Maisie, you can do it!

Alice went to bars, good start with a nice cast to handstand, toe half, into Jaeger. The biggest error came on the toe full where she was very late, but she connected it to the Pak without issue. Maloney to high bar, shoot half back to low with just a leg separation for the judges to deduct. Shoot back to high bar, toe on straight into a stuck double pike. Good routine, not quite as strong as in qualifying, but very well done to finish the first half of the competition in equal first place. 13.50 (5.6 D, 7.9E)

So half way through, and as I say, Alice was leading the competition.  Maisie had fought back from 18th into 12 place.

Floor for Maisie, starting with the new double wolf turn. I was such a fan of the opening to this routine as it was something a little different, and I really don’t like wolf turns at all, however I can understand why  she has made the change here. Well controlled on the double back today, and again on the double pike, so good start. We miss the change to ring on the footage but nice split full. and again on the change half. Lovely straight front with full twist to stage leap third tumble, and equally good on the straight front with double twist to finish.
Maisie got huge applause from the crowd on finishing, clearly appreciated her style and performance level. As ever Maisie sold her routine beautifully, and was light and elegant throughout. 13.20 today, 0.7 higher than in qualification.

Alice went to beam, a hit routine, and her strength on floor would have meant European champion. Was she aware? I don’t know. She had a long wait before she started, and after her lovely mount, a small wobble on standing up, then a huge wobble on the double spin which she did incredibly well to keep on the beam. A little short of range on the change to change half leaps, but safely through. As I’m sure many of you did, I held my breath, willing her to hit the free cartwheel layout series as she had in qualification. It wasn’t to be, right off line, and absolutely no chance to save it from coming off the beam. I was absolutely gutted for her, the title really was there for the taking. 1.534 down on beam from her qualification score, and only 1.052 from the title at the end of the competition. 12.466 (5.2 D, 7.2 66 E)

Alice will also return for the beam final, and again the judges are rewarding her work well when she hits. She scored 14.00 in qualification, and could go a little higher still, everything crossed for her on Sunday for redemption on this piece.

Into the final rotation,  Alice was in 5th, Maisie had climbed to 7th.

Vault for Maisie to finish on, and an improvement from her qualification score. Handspring piked front half for 14.066 , her second highest score of the year on this piece. A great way to finish, and after a difficult start, she fought back to finish the final in 4th place, the equal second highest placing ever from a British junior.

Alice also finished strongly after her disappointment on beam. A little bit of a hop round on the opening Memmel spin, then a really well performed one and a half to two and a half opening tumble. Great form throughout, great landing. Fully rotated triple twist second tumble, a small hop and a little low in the chest, but again very clean. Tour jete half through to change half dance passage, nice double pike with a hop back, and a really good double tuck to finish. Alice always works within her means meaning her gymnastics is very clean which makes her a lovely gymnast to watch. She has a quiet elegance through this routine, and I look forward to seeing it again in finals where she could definitely medal. I very much hope she does, as whereas 5th in Europe is a huge achievement to be very proud of, I imagine she was a little disappointed in today’s outcome given her potential to medal and even take the title.

So a mixed day for Alice and Maisie,  but the results were actually fantastic, our best placing in Junior European AA finals is 3rd and 4th with Ellie Downie, and Catherine Lyons in 2014. Both gymnasts hit  in that competition, here, they still placed very well with both gymnasts able to score 1.5 – 2.0 points higher. Both will be back for finals, Alice on bars, beam and floor, and Maisie beam. I’m sure we all wish them to be at their absolute best.

Congratulations gymnasts, great fight shown today. Both girls displayed the determination and never give up attitude needed to fight for places on senior teams in the future. I’m sure we will see both at major championships in the years to come. 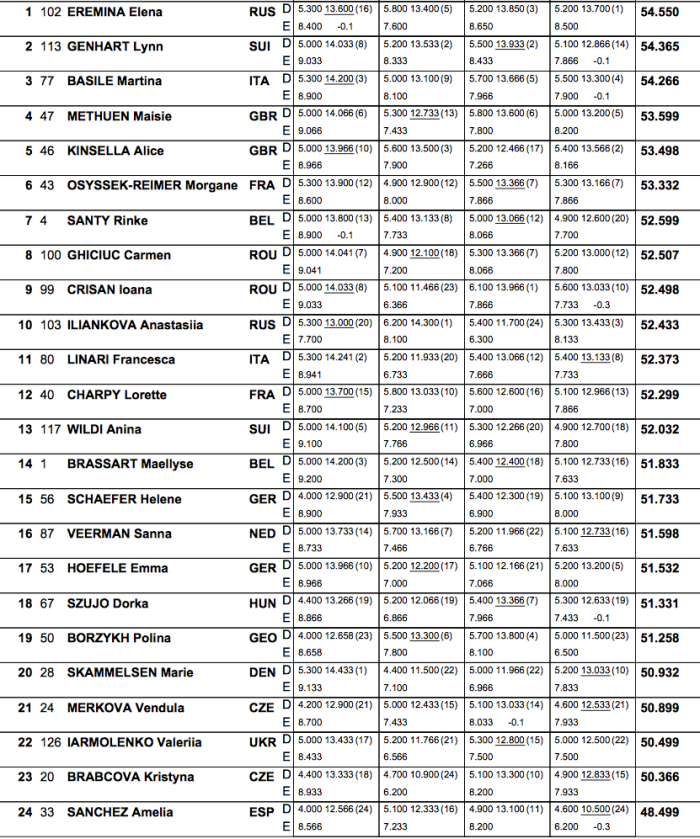