I know that there are many readers of this blog that aren’t based in Great Britain, as I get various stats, one of which is how many of the visitors are from each country. In an average month, people from over 40 countries will visit, so there are many keenly following  what goes on in British gymnastics. When it comes to Olympic sized audiences though, many don’t, and tonight they met Amy.

I read a lot of gymnastics blogs, forums, and twitter feeds from all over the world, and you know what, not one person predicted a medal for Amy in this floor final, not one. In a final where gold and silver were as close to guaranteed as you can get, the bronze was up for grabs, and people knew Giulia, Vanessa, and Mai, they knew Yan, but they didn’t know Amy.

Of course people knew who Amy Tinkler is, many predicted her as a lock for the British team, many will have seen her in her first year as a senior compete brilliantly to help GB to their first world medal, but she wasn’t a world finalist like Ellie, Claudia, and Ruby, she missed Euros this year to concentrate on her exams, so didn’t have the chance to take an individual medal like Ellie and Becky. Amy came into Rio I imagine to most as a strong member of the British team, but not necessarily one to watch individually.

For those that have followed British gymnastics closely, this medal isn’t so much of a shock, a wonderful surprise, but not a shock.

Amy Tinkler made the European floor final in 2015 finishing 6th, she tumbled full twisting double straight, double straight, one and a half to two and a half, double pike. She was a little bouncy on her landings, but had huge power, and looked right at home up on the podium selling her routine.

In October 2015 at her first world championships she was 13th on floor in qualifying, the full twisting double straight was gone, the tucked double double in. On her 16th birthday, she was absolutely solid for the team, again performing superbly to contribute to the team medal.

I have written time and time again that Amy is a big time competitor, that she has looked SO ready this year, so confident, so excited for the challenge ahead. Some gymnasts fear big competition, Amy relishes it, and is at her best. We saw the big routine in the spring, full twisting double straight to open, double double second tumble, one and a half to double tuck, double pike. It was very good, she had all the work there, but the accuracy needed consolidating, and there were areas where execution could be worked on.  When did it need to be ready? Rio.

This is Amy Tinkler, Olympic Games is a challenge to be risen to, to step up to, to show your best without fear, and this is exactly what she did.

Amy’s first routine in Rio was beam in qualification, she hit it cold and contributed the equal highest score to the team total with 14.500 a personal best. On floor another personal best, and on vault 14.833, not her personal best, but you wonder was that perhaps as she has spent a lot of time on the Amanar as she clearly has the height and time for it, as opposed to just the double, and absolutely nailing the landing. I’d put money on the Amy-nar coming next time we see her.

In podium training there were reports of a triple twist, I have no confirmation of this, but it does sound feasible that the third tumble will be one and a half to triple twist in the future. Prior to qualifications any talk of floor final potential was Ellie and Claudia, which after their performances at Europeans was understandable. Ellie coming off the silver on floor from Europeans had the mistake on her third tumble where thankfully she was ok, Claudia who had scored a 15.000 a few weeks earlier at Europeans had no major error, but just wasn’t able to score her best, and missed the final on an E score tie break.  Amy scored 14.600 (6.3, 8.3), her highest score of the year, the 4th highest British floor score of the year, and qualified in 7th to the final with the equal third highest D score. Many may not have noticed she was 0.1 lower in D score than her maximum, I don’t have the routine to replay, but a 0.1 suggests she was likely downgraded on a leap.

In team finals, on floor Amy had to fight for a couple of her landings, but she did fight, and was awarded her full 6.4 D. With the landings she was down on E, but still 14.466 total, and the highest British score again on this piece.

So to the floor final, the final competition of the Olympics for the WAG gymnasts, and as I said, with Simone and Aly as near to guaranteed gold and sliver, the bronze was wide open. Simone and Aly delivered as expected, and as Amercian gymnasts do, the real story of this final was the bronze.

First of the contenders, Mai Murakami of Japan, a great performance from her, 6.3 D so not awarded her full difficulty, but still up 0.1 from qualification D score wise, and just 0.033 lower total score for 14.533.

Wang Yan again went through cleanly, no major errors for 14.666, the exact same score from qualification.

Then Amy, and she did exactly what we’re coming to expect from this exciting young gymnast, she hit the best routine she has ever competed,  with the highest difficulty she has ever competed, in an Olympic final. It didn’t matter where so much where she finished, that wasn’t within her control. What mattered was that she did what everyone wants to see, brought competitive fire and determination to the biggest stage of all, and hit. She hit like an American, and as far as consistency and bringing the big performance goes, I feel that is the highest compliment you can give a gymnast.

Full spin, then lovely clean Popa jump to start, full twisting double straight opener , the best I have seen her do. It was higher and cleaner than I have seen, she does still have a closing of the hips on the way down, but less than ever, and she really didn’t need it today she was so high. A small bounce back, great start. Stuck double double second tumble, then change leap through to tour jete full, no question on whether it was fully rotated. The leaps are always the weaker part of Amy’s floor, and I felt today that she hit her positions better, and had more extension that she has done. High clean one and a half through to double tuck, the tiniest slide forward on landing, change full leap with sissone out, and again better range and extension. Three steps into a big stuck double pike, and I bet she hadn’t even visualised it going any better! Not only did she tumble superbly, she performed, and the crowd absolutely loved her. 14.933, only Aly and Simone went higher over the whole of Rio competition.

Giulia Steingruber  the European Champion had a bad day out there, she fell on two of her tumbles, and struggled with accuracy on her leaps. The vault bronze from the day before will help soften the blow. Would she have beaten Amy without the errors? Difficult to say really, no gymnasts other than Simone and Aly had gone above fifteen, and Giulia has competed well on floor twice, so I would say no.

Vanessa Ferrari in I believe her last competition was the only other gymnast who could potentially take the bronze away from Amy, tie braked out of the 2012 floor bronze, if it weren’t for Amy, I’d have been very much rooting for Vanessa here. It wasn’t to be for her today either, she upped her difficulty by 0.1 from qualification, but lost 0.2 on E score, and finished in 4th place.

A bronze medal for Amy, she made history being the first British WAG to make a floor final, she made history again with the medal, I don’t imagine she’s done making history for a minute. It would be easy to say I thought she could do it now that she has done it, I think more accurately, I didn’t think she couldn’t do it. In a situation where things are open, and whoever hits wins, I would put my money on this girl every time. 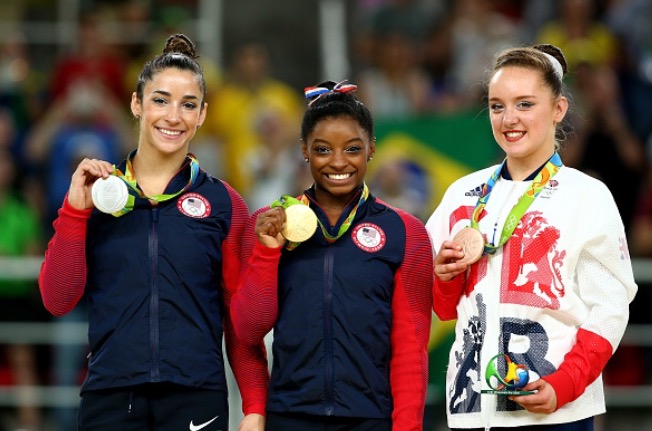 This is what I mean in saying now they know Amy, now everyone will have seen what we have seen through the years as she’s come up through age groups into Espoirs and Juniors as part of the most talented and competitive group of British gymnasts yet. She has had to fight for her results, for her place on junior squads and teams amid Ellie, Catherine, Teal, and Tyesha, and she made it through. Amy Tinkler sixteen years old, World and Olympic medalist.

This is the picture Amy has had pinned at the top of her twitter account, Amy has no need to introduce herself any longer, and you can be certain she will continue to work even harder. I am hugely excited to see where she can go over the next quad.

Congratulations Amy, coaches Rachael Wright and Nicola Preston, and all at South Durham gym, I thought the Rio bronze medals had a rose gold like pink hue to them when they were  revealed, so fitting for a pink lady.