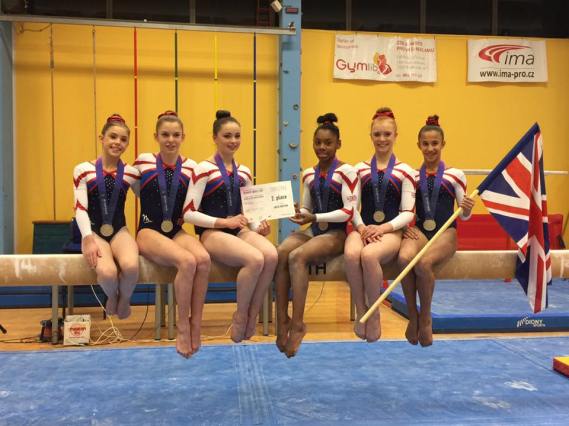 Day one at the Olympic Hopes Cup, and the British juniors have taken the silver medal behind Canada and ahead of Czech Republic 1. A good result for this young team of two Espiors, three first year juniors, and one second year, against Canada’s strongest possible junior team where they fielded three second year juniors, and two first years including the very talented Anne Marie Padurariu who scored an enormous 57.150 to take the AA title, a score which would have placed her 10th in the Rio AA final. With a year left still in the junior ranks, definitely one to watch. All credit to the Canadian team, a very good result for them.

The feed concentrated heavily on the Czech team, and there was a lot of jumping about so we didn’t see all the routines by any means. I have captured a few, and saw bits of others, I should hopefully have a lot more for you tomorrow on finals day.

As is so often the case, the team started on beam, today it proved a tough start for the girls. We didn’t get to see Scarlett, Chiara had a fall on her layout, Taeja either we didn’t get the whole routine, or it was just my feed that froze, as there was no acro series shown,  but she did have a fall on her front somi . Latalia started very well with some beautiful work, but had a fall on her double spin, and Zoe was also going really well, but then was a little tentative on her change three quarter leap and came off. Amelie went clean with a great routine for the second highest score of the day on this piece.

On to floor, and a real shame we didn’t get to see everyone, as there was some absolutely beautiful work that there were snippets of in the background. We saw Scarlett land her double tuck, followed by some absolutely stunning presentation and choreography, a really beautiful performance level on this piece, I really look forward to seeing more of this young gymnast, firstly at British Espoirs in a few weeks, then as she enters  the junior ranks next year. Zoe we saw her opening tumble, although not the landing, and the end of her routine only, but the same bubbly fun performance we’re used to seeing from her, and her score suggests a successful routine. Taeja we didn’t see the opening tumble, but it would have been a double, and she’s used the tuck and pike previously, plus has been landing full ins, which I was hoping to see whether she added. A new triple twist second tumble, one and a half to straight front, then the two and a half moved to the end where unfortunately she had a fall.
Latalia we also missed the whole routine, but saw part of it in the background. I have loved Latalia’s old floor, and she now has a new one that looks to be just as beautiful as her previous one. I very much look forward to seeing the whole routine as she really commits to her performance on this piece. Chiara looked strong, with a good solid routine landing all her tumbles, nice leaps, and well performed dance, Amelie was awarded the third highest floor score of the day with her fully rotated triple twist, and straight front double twist, along with clean lines, great range through the leaps, and elegant performance.

Vault we didn’t see much of the British girls on this rotation, which was a shame. Latalia didn’t vault today, It seems from the D scores that Chiara, Amelie and Taeja vaulted full twisting Yurchenkos, Zoe does a pike from half first vault, and tucked front half second, Scarlett who is getting close to her full twisting Yurchenko vaulted a straight today for a big 9.3 E score. I’m not sure how long Chiara has had the full twisting Yurchenko for, I have seen her vault the straight, but not the full, so she’s recently upgraded  here. Over fourteen for Taeja and Amelie, and a big 9.450 E score for Amelie which was the joint highest E score of the day on any piece, so great vaulting from her.

Finishing on bars, No bars for Scarlett today, but Zoe went cleanly though her routine, looking as though she is getting stronger on this piece. She will be working toward adding a bar change, but is definitely improving here. Taeja looks as though she is building for a big second junior year, adding another upgrade here with the toe on Tkatchev. It didn’t come off today she had a fall, and wouldn’t have been given the skill, but the rest was fine, and she finished with a sky high full out.
Latalia started really well with a strong toe full to Maloney to Pak. An error on the cast to handstand took her off the bar which was a huge shame as she was going well, she then finished with a nice Jaeger, and a high double pike. Amelie finished off a fantastic day for her with a clean flowing routine earning her the second highest score of the day, and highest bars E score.
Chiara also had a good day here, we didn’t see her routine, but she scored well enough to earn herself a place in the bars final tomorrow.

Ignore the captions on the video, they got Taeja and Amelie completely muddled on this piece. 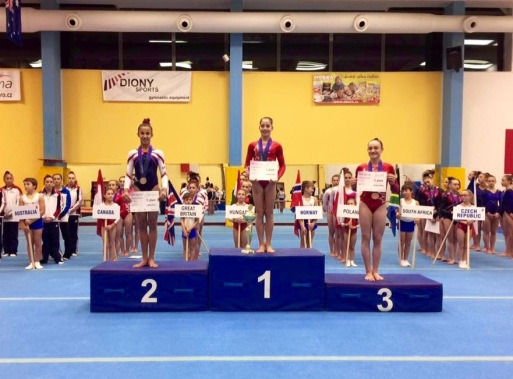 In the AA, Amelie had a fantastic day scoring 55.100 which for an Espoir gymnast is an enormous score. For reference, that score would have won this years junior Europeans by .55, a competition Amelie will be working towards for 2018 when she’s old enough to be selected. Silver overall was a great result for her, and will give her huge confidence going into the British Espoir Championships.

Taeja had one of those days that all gymnasts have, she went for some new skills which didn’t all come off, but still scored 51.200 placing 7th with three falls which would have placed her on the podium. She will be back next week at elite Masillia though, and I’m sure have a better day.

Finals tomorrow, the vault individual vault scores weren’t published, but I think we will be seeing two of Amelie, Zoe, and Taeja there. Amelie and Chiara made the bars final, Amelie and Taeja beam, and Amelie and Zoe floor.