A mixed outing for the young British team at the Elite Massilia event in Marseille over the weekend. Starting on Saturday with the team event, a good start on vault, with full twisting Yurchenkos from Alice, Lucy, and Taeja, and a tucked Yurckenko full from Georgia.
On to bars, and for Georgia a fall at the beginning of her routine where she had one of those very nasty straight leg landings, and needed to get her knee checked out, unable to play any further part in the competition. Incredibly upsetting for Georgia, especially as she has been hitting the routine so well for weeks leading up to this competition, and went through superbly in warmup. The team then found themselves in a three up three to count scenario, the first time these young gymnasts had faced this type of challenge, and in the very worst of circumstances for them.
Taeja went through well, catching her new toe on Tkatchev, Lucy had a fall on her shoot half, but showed an upgraded routine, and Alice did’t fall, but did score much lower than she would usually.
On to beam, and Taeja had a fall on her punch front, but Lucy and Alice were clean and made it through to finals, with Alice topping the beam standings on the day.
Finally on floor, strong routine from Teaja to make the final, Lucy went though with no major errors but did have an out of bounds, and Alice was short on her triple twist, and had fall on her final tumble.

Fifth place for the team on the day, lets look more closely at the how the girls fared individually.

Georgia of course was only able to compete fully on vault, she performed her tucked Yurchenko well with plenty of time in the air, and I think we’ll see the straight Yurchenko she’s been working on soon enough.

As far as I’m aware, Alice hasn’t competed since her hugely successful junior European championships six months ago. She had a mixed day here, starting well on vault with her full twisting Yurchenko for 13.850.
On bars, when I initially saw the scores I assumed she had fallen, as 12.20 is a very low score compared to the 13.8’s she was awarded at junior Europeans. For Alice the 5.1 D score is low, and 7.1 execution severe. I think what happened with the D score is the routine would usually be out of 5.6 if awarded everything, 5.4 as she’s competing senior rules here  with a C dismount so is awarded 0.3 as opposed to 0.5 on that composition requirement. I think also on the D score she wouldn’t have been credited with her toe full, which was late today.  Alice had however added a Stadler shoot to high bar directly connected to her shoot half, in place of the toe shoot, a nicely performed upgrade from her there.
In contrast to bars, beam went very well, and Alice topped the standings ahead of Russia’s Olympians and junior European champion with a score of 14.00. The same routine we saw from her to take junior European silver.  Alice had a wobble on her double spin to start with, which she controlled well,   change to change to side leaps, then safely through the difficult free cartwheel layout. A small adjustment on the fee walkover, and a strong two and a half twist to finish. I look forward to seeing what Alice brings on this piece in the spring when she gets going in the senior ranks, she has the potential to develop into a great beam worker for GB.
Finishing on floor, Memmel spin to open, then Alice unveiled a new  one and a half to triple twist opening tumble, impressive high level difficulty from her here. She did land short, but here we see what she’s planning for her senior debut. Double twist second tumble, my guess is that this will either be the two and a half she did have after the one and a half, or she planned the two and a half, but went for the double knowing she may have had the triple downgraded, and not wanted to risk repeating the skill and receiving no credit.  Nice clean leaps, then double pike with bounce back, finishing with the double tuck, Alice made a good attempt to cover the fall with choreography (I’ve seen many a wolf turn end the same way!) but she did have to count it and was awarded 12.900. We will see another different tumble from Alice next year, as she used the free cartwheel for her fwd/side composition requirement, something that is not allowed in the new code as it now has to be one of the tumbles. I would hazard a guess at two and a half to punch front/straight front/full twisting straight front, perhaps progression through all three.

Lucy was the top scorer on vault for the British team, with 14.00 for her Full twisting Yurchenko.  On bars, as I said above, Lucy did have a fall on her shoot half, but she also came with a very different routine from the one we saw from her earlier in the year.  She has added both Pak and Maroney transitions, the Maroney is linked to the shoot half for connection bonus, so great work from her. Although not a new skill, Lucy also has a nice high piked Jaeger, a skill upgraded in the 2017 code from a D to an E. 11.350 with the fall, but both new skills completed.
Lucy made the beam final with a strong routine. Punch front which we hadn’t seen from her before, then a nice sharp connection through the change to change to side leap which is also new. We don’t have the whole routine, but she has kept the flick layout as her series, no full twisting flick here though. Nice two and a half to finish 13.150.
Finishing on floor Lucy opened with a double pike, two and a half twist second tumble. She has a one and a half to double twist, then straight front full twist to finish. No major errors, but Lucy did struggle to control her landings on the day, and had an out of bounds meaning her E score did suffer 12.550

Taeja vaulted a full twisting Yurchenko, for 13.500, then went on to bars, where she was high in the Jaeger, and caught the new toe on Tkatchev. The shoot half went into handstand on top of the bar, and she really went for her handstand positions on her casts. There were some E score errors for the judges, she had some tidying to do on her Jaeger, and one of the casts she lost tension on momentarily, but great attack through the first half on the routine. The second half she did have a short cast, and was late on the giant full, but good clean work, and a high full out to finish for 13.00 and a place in the final.
On beam Teaja was solid through the flick flick layout, then had a fall on her punch front. She had a wobble on her side somi, but controlled it, then finished with a very tidy two and a half twist. Fall aside I was impressed at how sharply Taeja worked her routine, she appeared confident keeping it flowing throughout which is great to see. 12.400.
Finally on floor, Taeja had just a small hop on her double tuck, got her new triple twist round albeit with her feet a little way under her on landing causing her to step back. Clean leaps, then one and a half to straight front. A strong two and a half to finish, good routine and she was into the final with 13.800, the third highest floor score from a British Junior in 2016. 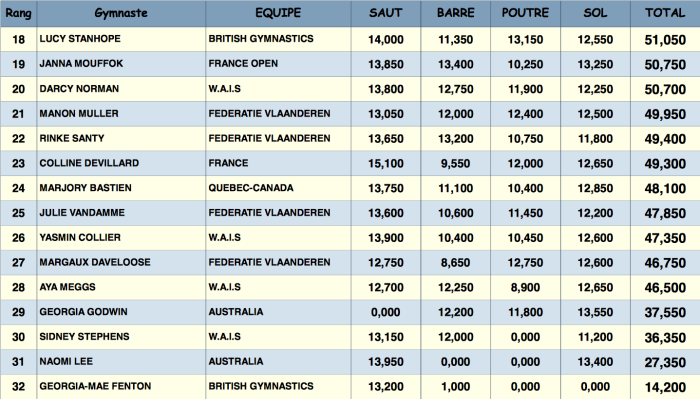 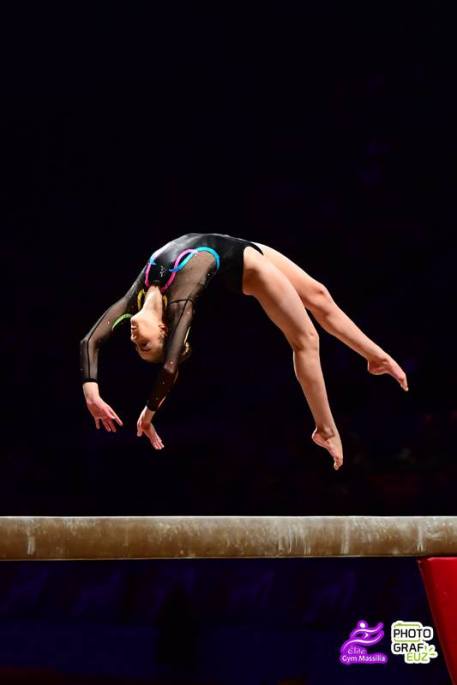 Lucy in action in the beam final

Taeja Improved her bars score from day one, again very strong in the first half of the routine, then just a short cast and the later turn in the second, but I would say not as late this time. Good work from Taeja, nice swing, and I think we may see her upgrade again next year, perhaps a Maroney and or a Pak so she starts to build connections, and I’ll be keeping my eye on that high full out to maybe double double when she goes into the senior ranks in 2018. Fifth place for Taeja, and the second highest E score, job well done.

Lucy’s flick to chest stand mount was well appreciated by the audience, she started beautifully, moving with poise and elegance, then landed her flick layout really well. A small wobble on the free walkover, then she was unlucky on the punch front, her back foot landed off the beam, her front foot half off, and yet I did think she might be able to save it, she certainly attempted to, and that is the sort of fight we want to see. Lucy was again very sharp through the change to change half, then finished with a very nice two and a half twists. 12.033 with the fall, but the makings of a very classy beam worker.

Having qualified top, it wasn’t to be for Alice today, and a huge shame as having qualified with 14.00 for a routine with room for improvement, she absolutely could have taken the top spot here. Just a tiny bit over rotated on the double spin, but well dealt with,  she went through the change to change half leaps, chest down into a small wobble but again well controlled. Alice had a big wobble on her free cartwheel layout, she kept it on, but a costly 0.5 deduction. The free walkover took her off the beam, from the side on it looked pretty solid and landed well, but I imagine from the front she was slightly offline, then unable to bring it back. Two and a half to finish not Alice’s day on beam today, but she’ll be back. 12.533

Taeja hit another great routine on floor to take the silver medal. Almost stuck high double tuck, just the tiniest of hops, fully rotated triple twist, a little shuffle but very well controlled. Clean one and a half to straight front, a small slip of the foot on landing, but again minimal, another clean twist, this time the two and a half to finish. Great routine, choreographed to suit her well, and very well performed by Taeja. Mais  oui merci Taeja James from the commentator , mais oui indeed!  I think we will see further upgrades to this routine throughout her final junior year all being well, and can see Taeja being very competitive on in the international junior ranks.

An absolutely lovely photo of Lucy and Alice looking really happy for Taeja as she heads to the podium to collect her floor medal.