The 2017 European Gymnastics Championships will take place in Cluj-Napoca Romania from the 19th to the 23rd of April. The championships is an individual event this year, so no team competition, just four individual gymnasts allowed to be selected per country, AA and apparatus final competitions only. Although there is no official team competition, of course these ladies are as much as a team as ever.

The women’s competition gets underway with qualifications on Thursday the 24th of April, with the AA on Friday evening, and apparatus finals spread over Saturday and Sunday.

I will post a full schedule with details of how to follow and watch the event, but for now, congratulations to those selected:

Becky is of course the reigning European bars champion, and will go for her third title here, having also been champion in 2014. She is certainly capable of retaining her title, and her recent 14,600 at the English Championships is one of the higher scoring routines so far this year from any gymnast. Becky is also capable of making the beam final as she has three times now, and I’m sure she would love to repeat her success of 2015 where she took the silver medal. 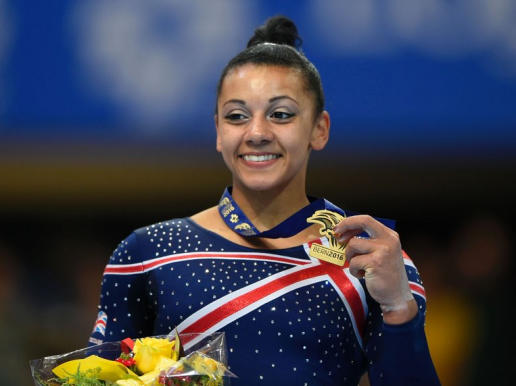 Recently crowned British senior champion Ellie comes into this European championships with the potential to leave with several medals. She is the reigning AA bronze medalist, and could well find herself on the podium once more, possibly even right at the top. She took silver on vault last year, and could again repeat or better her success. She could make the bar final again as she did in 2015, potentially the beam final, and as the 2016 silver medalist on floor, will be looking to push for a final place, and medal again here.

Claudia is selected for her her fourth European Championships, we have only seen her on beam and floor so far this year, and she will be pushing for finals on both. At the recent English championships she looked clean and strong on beam, scoring 13.750, with a dismount upgrade and bonus to come in at some point. A very competitive score among the European gymnasts so far this year.  On floor she also looked very good, she brought back the full twisting double straight opening tumble, nailed her double Arabian, and substituted the triple twist for a double straight. Claudia has been a silver medalist on floor at European level, and could very well repeat or better her success.

A huge achievement for Georgia-Mae, her first senior international, and her first major championships. Georgia will of course bring her intricate and beautiful bar work to the competition coming into the championships with a 14.600 (when GB bonus removed) top score in 2017, which she achieved at the recent British Championships. Georgia will push for a place in the bar final here, facing tough opposition from both Downie sisters to be in the top two British gymnasts from qualification. Should she make it, she is well placed to have a genuine chance at a medal as the international judges are likely to reward her very clean work. Whether Georgia competes on any other pieces this time, we shall wait and see.

Good luck ladies, we will all be supporting you!