After the elation of the AA, it was on to the apparatus finals today, opening as ever with vault and bars, and three more chances for medals. It was a double Downie day as far as British WAG was concerned, with Ellie competing on vault and bars, and Becky as the reigning champion, out to defend her title in the bars final. 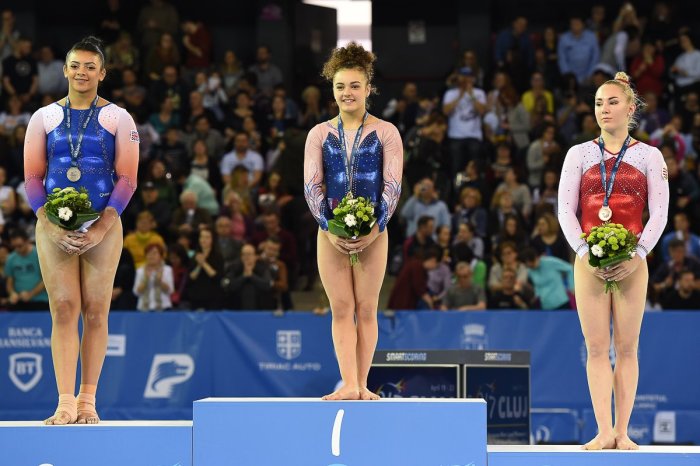 Vault first, and I was curious to see how Ellie would fare, it will have taken a huge amount of mental and emotional energy from her both preparing for the AA going in as favourite, then taking the title. This is new and unchartered territory, I think perhaps the first of what could be many times as her career progresses. It’s not too often that there are three days of competition in a row, this is again new ground, Ellie will have done four by the end of tomorrow.

I had a few people asking me whether I thought we would see Ellie upgrade her vaults today, as this is the standard question whenever she vaults anywhere. I know everyone is desperate for her to start taking the vault titles she has the potential for, but I am far more desperate for her to stay healthy, avoiding knee ligament ruptures that we have seen too often with gymnasts competing vaults they’re not 100% either ready or fit for. Her Cheng while it looks as though it’s progressing very nicely, did not look hard landing ready yet, and her Amanar we’ll see when that’s ready too. A European vault title would be amazing, and I have no doubt she’ll have one, likely several one day, a healthy body with the chance to slowly progress toward hitting Tokyo with a Cheng and an Amanar is far more important. For what it’s worth, I think we may possibly see one this year, possibly, although I believe more likely next year, then when she’s completely happy competing one, the other either around worlds 2019, or early 2020. That’s just my speculation though.

Opening with the double twisting Yurchenko, clean on, still high off, but not as explosive as we have seen from her, just that tiny bit of her enormous power missing today. Ellie extends so well all the way through this vault, she just didn’t have that enormous air time she usually does, and crunched the landing a little. Still a 9.00 E score, testament to her excellent form 14.400 (5.4 D, 9.00E).

Second vault, a very strong Lopez.  Legs squeezed together for the half turn entry, big block, through vertical, and maintaining her form through the half turn. She was a tiny bit off direction, but landed been the lines without issue. 14.300 (5.2D, 9.1E)

Silver for Ellie on vault today, a repeat of her placing in 2016.  I was a little surprised at the 0.267 only difference in E score between Ellie’s and Maria Paseka’s Lopez vaults, as to me there was a huge difference in quality, and a few of the E scores in general, but I would say the right gymnast with the bigger overall difficulty  won, and congratulations to Coline Devillard of France, the new European Champion, and to Boglarka Devai of Hungary on her bronze medal.

Bars next, and I imagine going in the Ellie probably wasn’t expecting to medal here, she qualified in sixth with a strong routine and some incredible bar workers ahead of her. We all know that finals are finals, and anything can happen. It did, and in the most bitter sweet way for British Gymnastics fans, and the Downie family.

Ellie went up first, another strong routine from her, she’s hit three for three here now. Forward toe circle with half turn, into the Maloney, powerful uprise into the Hindorf. Nice cast, then she was late on her toe full, but that seemed to be the trend of the day, with everyone other than Becky, and Nina late on theirs. Into the big piked Tkatchev, caught fully stretched, and lifting into the Pak to low bar. Cast right on top of the bar, much more controlled in the Van Leuween back to high bar today, another very strong cast, then the big stretched double straight with a hop back. Great routine again. 14.033 (5.9D, 8.833E)

Becky was drawn last, she had a big target to hit, as Nina Derwael had posted a 14.633. Becky posted a 14.600 a couple of weeks ago, so she was certainly capable. This is a new routine for Becky, what looks like a small change can take a huge amount of time to consolidate, bars is all about timing and feeling, and it takes time to get both cemented in. Having decided to take out the Shang from her Chow shoot, and use the Hindorf, Becky has added the Geinger, at the end of the routine, she will also add her own skill back in, and is rebuilding this routine. Testament to what a huge bar worker she is, the 6.1 she has been competing here is not her top difficulty and was still equal to the highest difficulty from other gymnasts.

So with equal difficulty, Becky started her routine, and for me the best routine we have see from her so far this year. Forward toe circle to open, pushing up into the top turn out. So clean through the Chow Shap to high bar, into the Hindorf caught fully stretched.  Nice cast, toe full on top of the bar, lovely Ricna, floated Pak to low bar, and I thought she was through.
Becky has been so consistent on her new Maloney to Geinger that I actually relaxed a little, thinking she’s done, and she’s done it, but those Downie girls have been bringing tears to my eyes all Championships so far, and today it was tears of sadness. Beautiful Maloney, into the Ginger, she got her hands on, just didn’t have the bar, and she was off. I have stopped the video there, as Becky was injured, and I choose not to share footage of her in pain on the ground. She has hurt her elbow, no word on how severely as yet, but she will not compete on beam tomorrow, Claudia will take her place.

Becky scored 13.00 for her routine, 5.5 D, 9.00 E. It is impossible to say, but I believe she would have retained her title. Having no dismount is a 0.5 penalty, you also are then only counted out of seven elements. Becky also lost her connection value for the Maloney-Gienger as you don’t get the bonus if you fall. With the 6.1 D she would have been awarded for a full routine, she’d have been on 15.100 without the fall, with only an upstart, a cast, a giant and the dismount to go. With a 4.67 cushion I believe she would have made it which makes it all the more sad.
Not this time for Becky, but for me still the best bar worker in Europe, and she will crowned again.