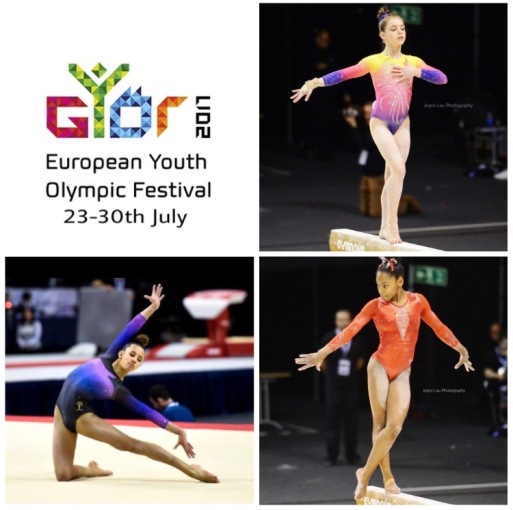 As the team set off for the European Youth Olympic Festival in Gyor Hungary, a guide to the competition, and how to follow the action.

The European Youth Olympic Festival, or EYOF as it is known, is held every two years,  alternating with the Junior European Championships. Drawing the best junior gymnasts from all over the continent, it stands on equal footing with junior Euros, the only difference in terms of competition, is the number of gymnasts per country allowed.  It is a multi sport event complete with opening and closing ceremonies, and Olympic village,  with athletes competing across ten different sports. A real taster of what these young athletes hope is prelude to the full Olympic experience in years to come.

For the gymnasts, the competition is open to those that turn fourteen or fifteen this year, so in the two years that comprise the junior ranks. Great Britain has selected two second year juniors in Taeja James and Zoe Simmons, and one first year junior Amelie Morgan. You can read more about the gymnast here:

The schedule is as follows, please note these are the UK times for the competition, so differ from the times shown on the website schedules.

The WAG team event is a 3-3-2 format, so all three team members can compete on each piece, with two scores counting for the team total.

For the AA and Apparatus finals qualifications, a maximum of two gymnasts from each nation many qualify for each.

The British WAG team will go in the first division of the team event on Wednesday the 26th. They will start on floor, where they will rotate with the team from the Czech Republic. There are four subdivisions, thirty teams will compete, as well as two mixed groups of gymnasts from six further nations (see entries list at the bottom of the page). There will be a long wait until the end of the day to see where the team have placed, and which finals spots have been achieved!

As we saw from the recent GB-ITA-FRA-GER-SUI junior international, Italy are very strong this year, and will be hoping to push for the title. Russia will also as ever bring a strong junior team, they are unbeaten in junior European competition since 2011, although Italy did beat them at Gymnix and Jesolo earlier this year when they came in second to the junior US team on both occasions, and Russia came in third. The GB team will also be pushing for the podium, the format suits them well, with two counted scores needed on each piece, they have the routines there between them to medal. Consistency will as ever be key for all teams, expect a good fight for the podium places.

Individually, well of course they have to safely qualify, but it’s no exaggeration to say that Taeja can very much challenge for the title here should she hit. She shared AA gold at the jr international with another title favourite Asia D’Amato last week, despite a fall, and changing her bars around adding a Shap and connecting her giant full to her dismount, but taking out her toe Tkatchev, so we shall see whether she comes with all of her difficulty.  Taeja could also qualify for several finals not least on floor where she will again be a favourite for the title should things go her way.

Academy team mates Amelie and Zoe will also be fighting for an AA spot, and it will all depend on who has the better day. Both girls are more than capable of qualifying in the top 24, and doing well so I would expect to see GB fully represented in the AA final. Amelie at her very best this year is capable of around 53.00 so again could be hugely competitive in this field. In terms of apparatus finals, again there is the potential there that both girls could see themselves earn a spot in the top eight when qualifications are over.

The target set for the competiton is a top six finish in the team event, one in the top ten, and another in the top 24 in the AA final, two to three apparatus final spots, with one to two medals. All potentially achievable, and even surpassable by this young team.

We can only wish them all to be at their very best,  what anyone else does or doesn’t do is completely out of their hands, the results will be what they will be. If they can produce their best, in a big event such as this, you can’t wish for any more than that. I’m sure you all will be cheering and willing them on with me!

There will be a live feed of the competition which is great news as this hasn’t been available at previous EYOF Games. Link here:

Live scoring will be available here:

As ever I will provide results, photos, and any video both on the blog, and all social media.

Wishing the gymnasts a successful and enjoyable Games, may you be at your very best, and know that we are all supporting you. 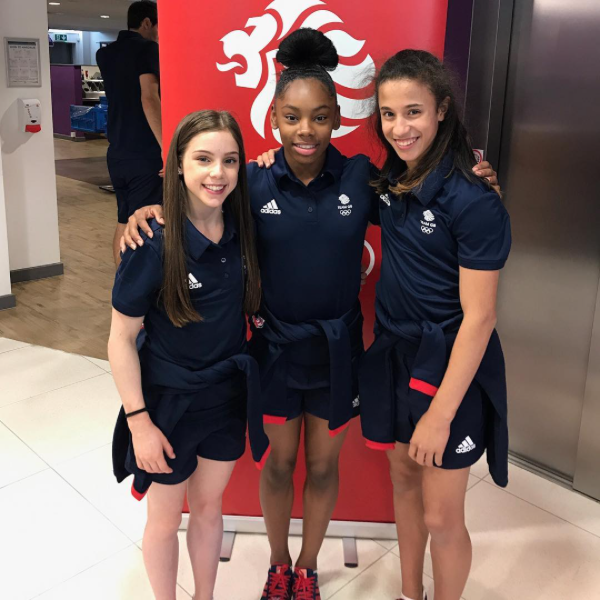 Entry list as of 22/07 please note that only two Italian and Russian gymnasts are listed. For Russia the third team member will be either Varvara Zubova, or Angelina Simakova as both were on the nominative list, and for Italy Alice D’Amato will join her sister in competing. For France, although listed here, Carolann Heduit has unfortunately sustained an ankle injury, and is replaced by Aglae Adam-Cuvillier. 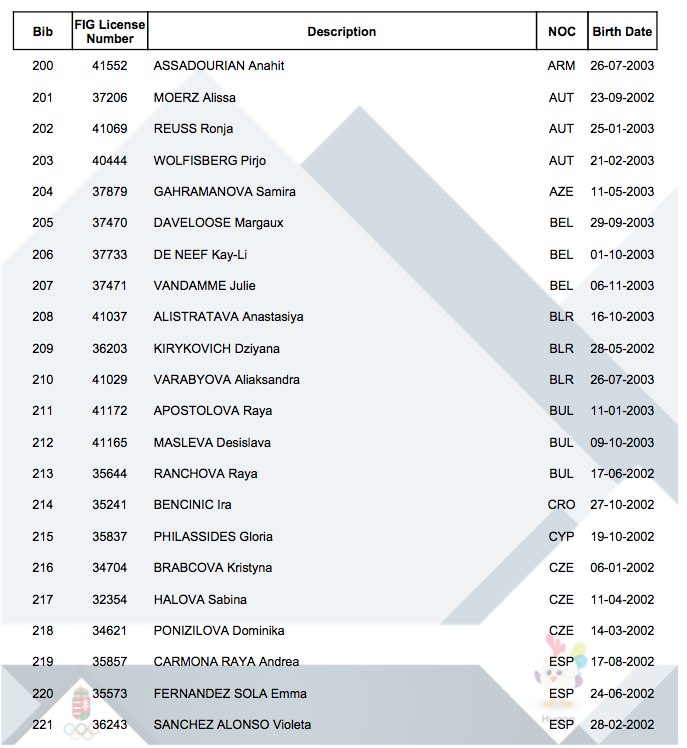 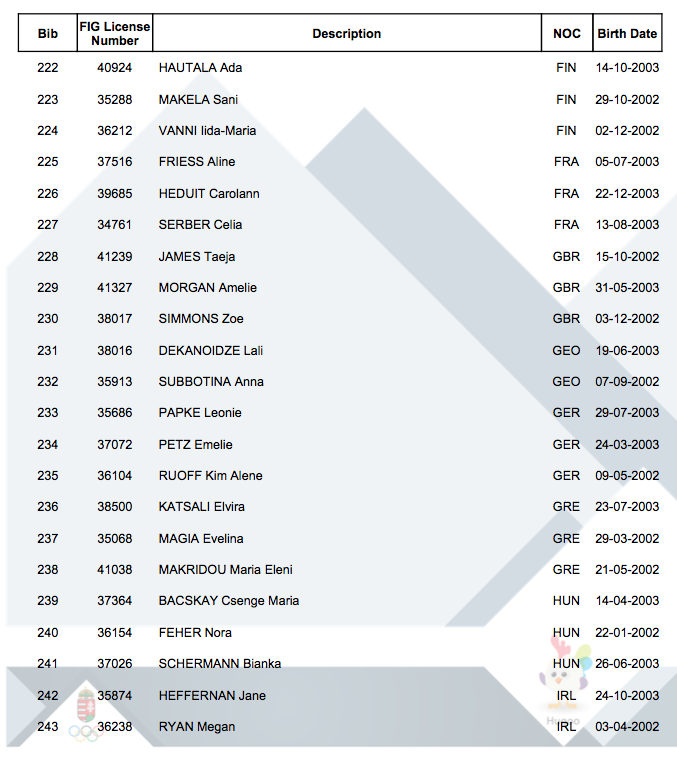 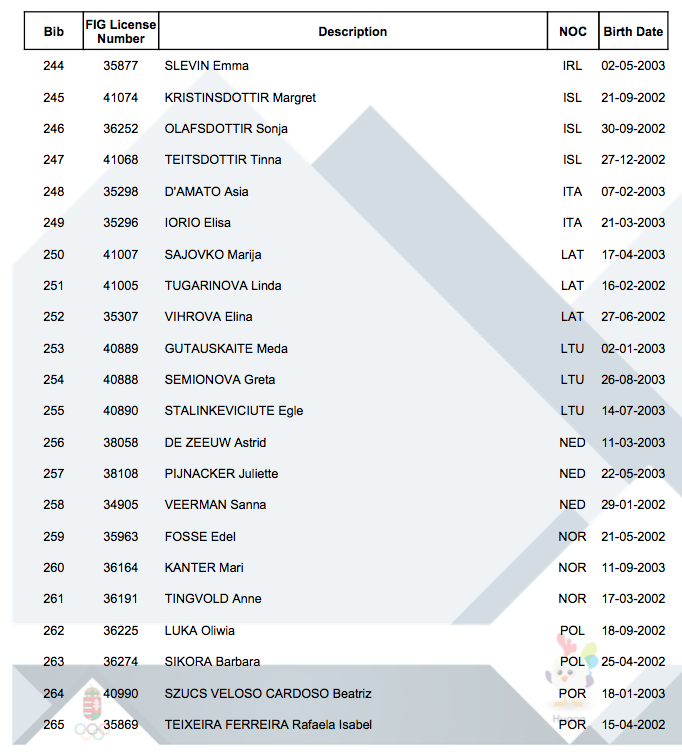 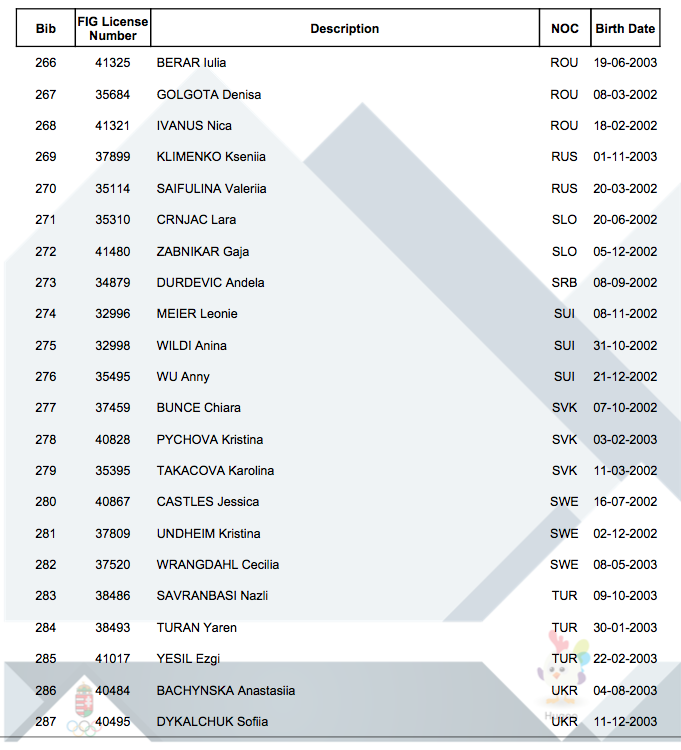