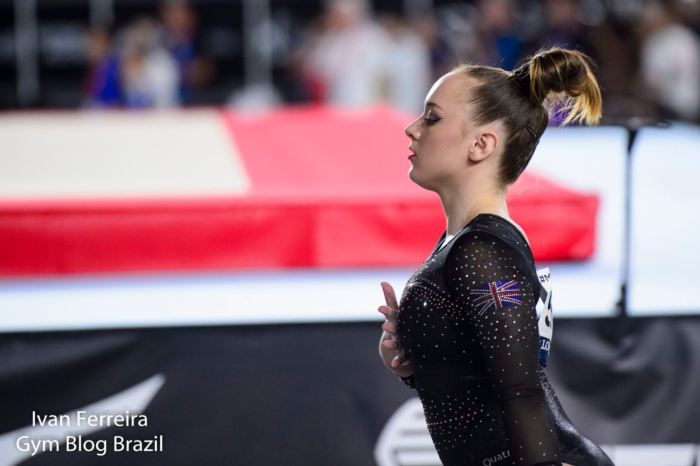 When the competition finally began, the growing list of contenders that didn’t make it to the Championships, and contenders that fell by the wayside once there could finally draw to it’s unhappy finish. The latest casualties after Rebeca Andrade and Larisa Iordache were injured just before and during podium training, were second place qualifier Ragan Smith who was injured vaulting in warm up, and GB’s own Alice Kinsella, so looking forward to contesting her first world AA, but the injury sustained in qualifications judged to be severe enough to not run the risk of worsening by competing.

For those left standing, a very different type of World AA from the previous four years, an open competition, no obvious champion, a question of who could hold their nerve, who could, and who would step up and take the title.

Oh how I wish Ellie Downie could have been here, of course she too would have had to hold her nerve, but she absolutely had the routines and scores to add World Champion to her European title tonight.

As it was, the top contenders were first year senior Morgan Hurd of the US, Canadian veteran Ellie Black, Japanese star Mai Marakumi finally looking as though she might fulfil the enormous potential she has always had, and reigning Junior European Champion turned first year senior Elena Eremina of Russia.
By this point to be honest I was settling for no-one else being horribly injured through the competition, and thankfully no one was. Worlds has been a bit of a massacre so far, let’s hope its claimed it’s last victims, as there are still six MAG, and four WAG apparatus finals to go.

Going in, much as I love Morgan Hurd, and I really do, if I could have picked, I’d have taken the fairytale home crowd win for Ellie Black who is coming to the end of her career. It was an exciting competition, tight at the top, high pressure right to the end. A fall on beam took Mai out, her excellent floor just not quite enough, and she missed the bronze by 0.1. Devastating for her, and sad to see her so upset.
Young Elena Eremina took the bronze with 54.799, a great result for this promising AA’er very much in the classic Russian mould, but with a little more steel running through her than we’ve seen from them in recent years Mustafina aside. She did have an error on bars, and the 14.200 she received although competitive in the field, was 0.9 below her qualifications score, should she have managed to match it, she’d have taken the title by over 0.4.
Ellie Black took the silver and competed very well overall. Just needing to put her hand on the beam after her punch front, and losing 0.5 in the process, other than that she took the pressure incredibly well, and I thought she had the title after her floor, but 0.1 said no, and it was second place with 55.132.
So the USA took the title once more, Morgan Hurd is the new World Champion. Morgan fought hard, handled the pressure, wasn’t perfect by any means, but was also lovely in many areas. After super Simone its interesting to have a champion that seems more human in competition, where Simone makes the near impossible look easy, Morgan is more human, she makes it look beautiful, but worked for in places, and hard earned. I very much look forward to following her senior career, she is still a little green, no way near her peak either skills or performance wise yet which is an exciting prospect. 55.232 was enough for gold today, congratulations to the young champion, a lovely gymnast, and seemingly an absolutely delightful girl.

The full competition can be seen here.

Amy started on beam today, we didn’t get to see it, but she did stay on, not at full difficulty remember as she’s not back to full strength yet, so no triple layout series, no standing full, and no triple twist dismount, but 12.166, 0.1 up from qualification, and a safe enough start.

On to floor next, after about a ten minute wait up on the podium (!!!!!!!!) a lovely tidy Popa jump to start, the the full twisting double straight, a little lower in the chest on landing today, with a hop forward, but immense difficulty, and safely landed. Double double stuck, second tumble, low in the chest again, H+H tumbles is a huge opening though. Change through to change one and a half leaps, showing better range and extension throughout the series, the straight front to one and a half twisting straight front did have a hop forward again today but she kept it in bounds this time. Change full leap all the way round, then double pike with a hop to finish. Good routine overall, 13.333 matching her qualifications score.

On vault, a classic strong double twisting Yurchenko as we have come to expect from Amy, just a hop back, and 14.400, just up from her qualifications score of 14.366, so very consistent here.

Finishing on bars, and Amy went into her final piece with 39.899. Knowing that she can score 14.00+ for a hit routine here, she would have been hoping to finish with around a 53.900 – 54.000 which would have seen her finish in 6th even at nowhere near full strength or difficulty overall. We weren’t shown the routine, but clearly she had some problems here, as her score was an 11.000.

It was 17th place AA for Amy today with 50.899, not what she would have hoped for, and not what she was capable of, but she knows what she has been through this year, how long she was injured, how recent her surgery, and how little training time she had. Amy is a very positive, determined, and forward focussed gymnast, my guess is she’s assessed her current situation, had a look at where she could have placed even at about 65% full strength, and it will fire her up for next year where she has three major events to prepare for, Commonwealth Games, European Championships, and World Championships. A full strength Amy Tinkler is an exciting prospect indeed, I’m looking forward to it already.