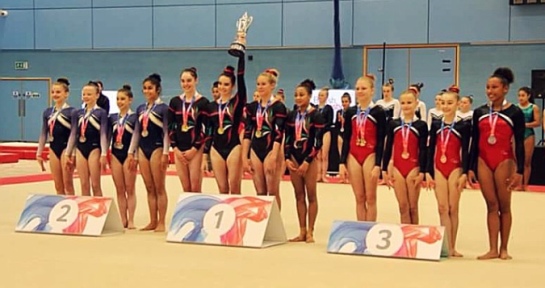 The annual Bill McLoughlin National Apparatus Team Championships took place on Sunday 8th October at Surrey Sports Park. For this competition gymnasts compete in regional as opposed to club teams, with gymnasts being eligible from the year they turn twelve, so first year Espoirs and onwards. Senior gymnasts may compete, but no British senior squad members may enter. There were junior and development squad members in action though.

The format is a 4-3-1 system, so four team members,  three up on each piece, one score to count.

Each team also has a ‘Wild Card’. The wild card can be ‘played’ only once – this will double the team score on that apparatus, however it may not be used on vault. The Wild Card must be ‘played’ at registration and cannot be changed once the competition has started.

Team medals are awarded, as well as individual apparatus medals.

Regions may enter more than one team should they wish, and this year the North West,  opted to enter two.

Vault competitors compete two different vaults which may be from the same group but with different numbers (Junior rules). The best average score will be added to the team total and used for individuals.

Congratulations to the Welsh team of Hana Davies, Rebecca Moore, Jolie Ruckley, and Carrlisa Allyene who took the title, with South West taking silver, and the team from the Southern Region the bronze.

The results show all scores, the scores in bold are those that counted toward the team total, the underlined score with asterisks indicates the wild card score which was then doubled for the team total.