November means it’s times for one of my favourite junior events, the Olympic Hopes Cup held in Liberec Czech Republic. This prestigious international junior event sees gymnasts from around the world gather to compete. The British team have a strong history here taking many team, and AA titles, an achievement the 2017 team will hope to emulate.

The competition is open to second year Espoir, and both junior years, so for 2017 those born 2002-2004. As ever It’s a young British team this year, with two Espoirs, and four first year juniors selected, no second year juniors this year.

What I particularly like about this competition is that it often serves as the first international event for up and coming British gymnasts. This year, we also have the added interest of watching some of those in the running for 2018 Junior European team spots, being given the chance to prove themselves at an overseas international. For those looking even further ahead, Espoirs Annie Young, and Halle Hilton will both be eligible for the proposed 2019 inaugural Junior World Championships.

The format is 6-5-4, five up for the team, four scores to count on each apparatus. The sixth member of the team can be put up on to compete on any apparatus to add to their individual total, and try to qualify for apparatus finals.

Open to WAG and MAG teams, the WAG team arrived in Liberec today, they will train tomorrow, and then again on Friday morning before their competition starts on Friday afternoon. Team and AA placings will be decided on Friday, Apparatus medals on Saturday.

All times UK times, depending on competition running, all times can be subject to change.

There will hopefully be a live stream again this year:

Reigning British Espoir Champion Halle Hilton makes her GB international debut in Librec. we haven’t seen Halle in competition too much this year, she was recovering from tonsillitis at the English Championships in April, only competing on bars and beam, where she took both titles, then we haven’t seen her since. A very exciting talent, Halle is powerful, clean, and accurate. She has strong potential as an AA gymnast, and is particularly good on beam. On my radar for a long time now, I’m very much looking forward to seeing her compete.

Phoebe has really impressed this year.  Coming into the junior ranks, she placed 5th AA at the junior British, and made bars and floor finals. She then took silver AA at the Junior English, as well as silver on bars, and floor. Phoebe was rewarded with her first GB international, a part of the team to take bronze against Italy, France, Switzerland and Germany in July, as well as the reserve spot for EYOF. Most recently, Phoebe has verbally committed to Oregon State University in the US to become yet another gymnast from The Academy to move from elite to NCAA gymnastics. Not yet though, this talented junior who is quietly making big strides has a lot of elite gymnastics left in her. 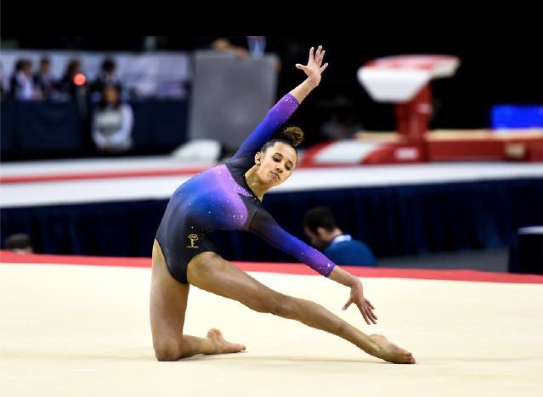 Unquestionably the strongest of the first year juniors, Amelie Morgan made a huge impression at the 2016 Olympic Hopes Cup where she placed 2nd AA with 55.100. Moving into the junior ranks this year, she took silver behind Taeja James at the Junior British, and was the only gymnast to stop Taeja’s clean sweep when she took the beam title. Amelie took bronze with the British team at the GB-ITA-FRA-GER-SUI international, and was selected for EYOF where she qualified to the AA finishing in 7th, and put in yet another strong beam performance to take bronze in apparatus finals. Amelie is known for her poise, elegance, and secure performances, she is a beautiful gymnast, and will expect to lead the junior team both here, and through 2018.

Paige Thomas gets her first GB international call up, although she is very familiar with international duty,  having been called many times to compete for the Welsh team. Paige ended her Espoir career with silver AA to Halle Hilton at the 2016 British last December, where she also took the bars title. Paige only competed on bars at the junior British, we then saw her compete this summer in France with the Welsh team where they placed third. It will be good to see Paige competing again as it’s nearly a year since there’s been footage of her in competition. As we have come to expect from the Welsh gymnasts, Paige is very clean in her work, light and elegant, a really lovely gymnast.

Sioned is a tiny power pack of a gymnast, and has made her GB international debut already this year. 13th AA the the junior British, Sioned made the vault final where she finished in 4th. Along with Paige Thomas, Sioned finished 3rd with her Welsh team in France this summer, she also scored 14.034 average on vault, her 14.134 for her first vault taking her to the top of the GB junior vault rankings for 2017. Sioned was called up to the GB team for the GB-ITA-FRA-SUI-GER international where she helped the team to bronze. As well as being powerful Sioned has the classic Welsh clean lines through her work, and is a very tidy gymnast to watch.

Annie Young made a strong impression at British Espoirs last year, finishing 5th AA, and taking bronze on beam. I put her on my ones to watch list, and she is absolutely flying this year. She hasn’t competed a huge amount, as her British Championships is in December, but when she has, she has impressed. Her routines from her regional events look very strong, particularly on bars. She also has a double twisting Yurchenko coming, and with her not hitting the senior ranks until 2020, she is on course to join the very exclusive club of Tyesha Mattis, Ellie Downie, and Amy Tinkler as so far the only GB juniors with this big vault. Annie made her international debut at the Rushmoor Roselbowl last month, where she finished 3rd AA to second year junior Taeja James and senior Emily Thomas, as well as taking bronze on bars. I am very impressed with this young gymnast, and wouldn’t be at all surprised to see her on the junior European team next year.

Good luck team and coaches, have a great competition and experience!