*** I waited until early evening to post this incase the results were released on the website, and they weren’t at posting. They have been now, so I have added them at the bottom as opposed to rearranging the entire post***

Apologies in advance for my less than usual level of reporting, but although there was a live feed, there were routines from the girls that we didn’t see. At posting there also aren’t any full scores published.

Phoebe placed 4th with 50.499, we saw her on bars, where she hit a beautiful cast to handstand to open her routine, Maloney to high bar with legs squeezed together, shoot half into handstand on the low bar, with just the tiniest of leg separations then  on her toe shoot back to high bar, she did come in very close to the bar, but she managed to keep it moving. The new Geinger lifts high above the bar caught at full stretch, she had a leg separation which she’ll iron out, but she really goes for this skill, and I wouldn’t be surprised to see her getting straight credit in time. Giant full, blind into forward giants then the flyaway half dismount. I’m interested to see what this dismount is going to be, as Phoebe has a perfectly good double pike, so she’s likely building to a bigger forward exit dismount here be it twisting or somersaulting.
Flick to chest stand mount on beam, double wolf spin, all well performed. A big wobble on the free cartwheel, but well saved. Nice change to change half, not the best angle on the feed, but they looked well extended and with good range as we are used to seeing from Phoebe. A fall on the flick layout, and I was surprised, which shows what a strong beam worker Phoebe is, as I’m so used to her just not coming off! Split jump W jump nicely done, and a very tidy one and a half twist dismount.
Phoebe opened her floor with a one and a half turning Wolf jump, then a huge double pike, where she had loads of time to open out but just wasn’t quite open enough as she landed which caused quite a big bounce back. Nice extended change half, change through to tour jete half to the corner, both leaps really well performed. Tidy one and a half to pike front, a high double tuck to finish, good routine.
Finishing on vault, strong full twisting Yurchenko with a small controlled pace.

Amelie placed 5th with 50.466. Opening on bars, the same start as Phoebe, beautifully extended hit handstand, Maloney to high bar with the tiniest leg separation, shoot half to low, the shoot back to high bar a little bit bent armed, then another lovely hit cast. Blind in, good stretch away from the bar to create the swing and lift into the new piked Jaeger which was caught well. Giant full, then an open double tuck to finish.
Amelie had a fall on her new mount the Yurchenko joined to flick layout. Her change to change half, she was uncharacteristically short on the change leap, a little out of line, then unsurprisingly as she was trying to adjust, she was very short on the change half. They only stuck out so much as her leaps are normally beautiful. Free walkover, her new split full was a little short today, then free cartwheel linked to much more Amelie like split and straddle jumps. The split jump half side on looked good enough for credit from the angle we saw it, tidy double twist with a hop to finish.
As I’ve mentioned, as yet there isn’t a full score sheet, There were scores for the first piece, and half way scores, and looking at the two, it seems that Amelie scored 10.800 for this routine, so fall aside, the big jumps and connections just not working out for her this time. Her recent international hit routines have seen her scoring low 13’s, so a tough outing for her here today, and a shame, as she was 2.05 from the title, well within her reach.
Amelie opened floor with a double wolf spin, then a high double tuck. Tour jete half where she hits a beautiful split position, then second tumble, two and a half to punch front linked to sissone, lovely. Change to ring through to change half, a little loose in her feet which the judges will pick up on, but again such lovely positions. Double twisting straight front to stag leap very well executed to finish, strong routine beautifully performed as usual.
Finishing on vault, nice full twisting Yurchenko with a tiny hop.

Jolie placed 11th with 49.383. We saw her on beam where she started with flick to chest stand mount, then change leap to sissone, just a tiny bit short of split on both. She had a big wobble on her flick layout, but saved it, free walkover where she was a little short so took a pace back, but brought it under control well. Double spin it looked to me as though she touched the beam with her hand to stop herself falling, but I’m not 100% sure, then her change half she was quite short here. One and a half twist to finish, not her best work on this piece this time.
Jolie opened on floor with a lovely double pike very well landed. Split jump full, then a nice clean one and a half twist to straight front with a hop for her second tumble. Change to ring through to change half, well extended through the leaps, tour jete half to the corner, a tidy double twist to finish, good routine. The music was out of synch with the blurry feed, but I love this routine, and the way Jolie performs it.
Nice vaulting from Jolie, a clean FTY with a very small hop.
Finishing on bars, Tkatchev, upstart handstand into the toe half, forward giant, top out, shoot half into handstand linked to the shoot back to high bar. Giant full, then two giants into a neat stuck double pike.
Beam aside a good AA.

Zoe finished in 12th place with 49.149. We first saw her on floor, where she has a lovely new routine, the same energetic bouncy style which suits her so well, and I look forward to seeing it either in person or on a clear feed. Double Wolf spin to start with, she may have done something in the corner, but that part of the floor wasn’t covered, then a big straight front double front opening tumble which unfortunately she sat down, just not quite round far enough, but very nearly. One and a half to pike front second tumble, change leap into change three quarter, then two and a half twist with a small controlled pace on landing. Lovely light fast Popa jump to finish.
On vault we saw a high, flighty pike front half which she had so much power on that she needed quite a large step back on this time.
On beam, press to planche, clean and snappy change to change to side leaps, then a very solid flick layout. Well fought on the free walkover where she had a big wobble, but saved it well, the E rated charge there quarter leap well negotiated, full twisting straight front dismount. We will see the double front from her, we’ve seen it in training and it looked great, so it’s just a question of when.
Finishing on bars, right in handstand on her first cast, snappy Stalder, a bit late on the giant full, then a giant into Tkatchev. Pak to low bar, top turn, shoot back to high bar, blind in, forward giant, then hugely impressive, but not hugely surprising given how efficient she is at this skill Zoe has upgraded her double front to a double front half out, a great way to end her routine and her AA competition. 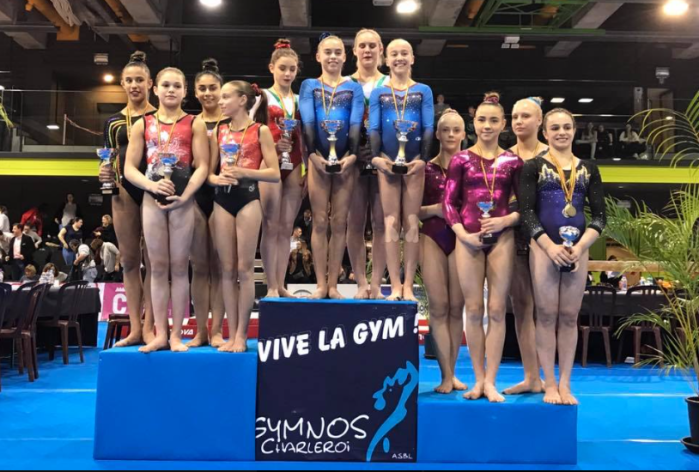 Day two, and I was expecting apparatus finals, but actually had no idea what was going on for pretty much half the event. There were four pieces going on at once, Amelie competed on beam, and whereas she is a gymnast you absolutely expect to see in beam finals, I wouldn’t have expected her today.  I said on my social media that I had no idea what was happening, and a big thank you to Jolie who after she had finished her events messaged to let me know.

So, day two was a team event where each nation had been paired wth another nation to make a team of four. Each gymnast had to compete on one event, and could compete on a maximum of three. Great Britain were paired with Canada, Wales with Norway.
I don’t know all of the pieces the girls competed on, its entirely possible that not all of the routines were shown, I also lost my feed after Zoe on floor, so if Phoebe competed beam I didn’t see it, and no floor from Jolie or the GB girls, or vaults from the Welsh.

Team Wales and Norway took gold, so a great day for Zoe and Jolie. We saw Jolie first on bars, well a bit of her bars, Tkatchev, upstart handstand, toe half all went well, then the feed froze, until the end of routine where we saw a nicely done giant full, and a very clean double pike with stuck landing. We didn’t see Zoe on bars today.
Jolie was next up on beam, and a much, much better routine for her today. Flick to chest stand, change to sissone light and clean. Flick layout well landed, beautiful floaty free walkover without a hint of adjustment. She had a wobble on the double spin, but got it back under control well. Change half just a little short, than a clean and tidy one and a half twist to finish, good flowing confident routine, much better, and more more like the Jolie we usually see on this piece.
We saw Zoe on floor, double Wolf to open, then the big straight front to double front, landed today, very impressive tumbling. One and a half to pike front, change leap through to change three quarter, light and snappy. Two and a half to finish, big Poppa jump, great routine from her.

Team GB with Amelie and Phoebe took silver. Phoebe had very uncharacteristic fall on her Yurchenko full, coming short, she looked a little sore on her right foot as she walked off, but thankfully was ok. We didn’t see Amelie vault today.
Phoebe did a nice giant full on bars, other than that the feed froze her entire routine, Amelie we didn’t see on bars.
On to beam, Amelie hit the big new mount today, what I would call a controlled wobble at the end, but just so beautiful through the acro skills. Both the change and the change half were much better today, she didn’t link them as she had balance check in the middle, but much more like it. The light free walkover she made a very good attempt at joining to the split jump full today, was she quick enough? I think the small pause may have been more than the judges would accept, but an excellent attempt. Free cartwheel, then the sissone and straddle jumps linked, followed by the side on split jump. Double twist with a small hop, much better routine today.

Individually, Amelie took the floor title with Zoe taking bronze, also a big well done to Jessica Castles of Pinewood competing for Sweeden here, who finished sixth AA, took the beam title, and silver on floor, a great competition for her. 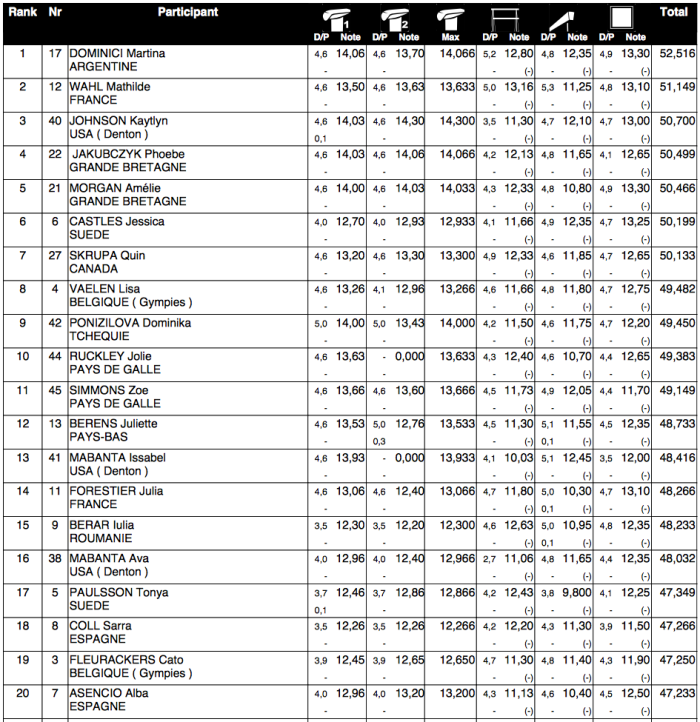