Day one of the 2018 British Championships, the youngest of the competitors took to the podium, many of them for the first time. It is worth noting that with the move from December to early March,  we are seeing the first year Espoirs ten months earlier than we usually would, and most are still just twelve year old. For the second years, their final Espoir event has previously been just before they make the jump to the  junior ranks, now they have nearly a year left, so a big change in terms of where the gymnastics would hope to be development wise.

Gymnasts eligible for this event have either passed their Compulsory 1, some just three weeks ago, or achieved the qualification score from the Challenge Cup.

There is a bonus system available for the Espoirs, as well as specific extra neutral deductions. The rules for this age group are as follows: 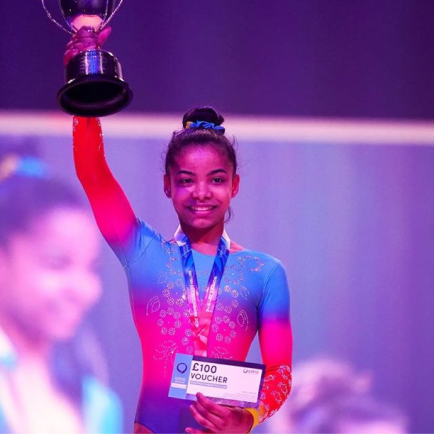 Huge congratulations to Alia Leat of Heathrow, British AA Espoir Champion for 2018. Alia took the title by a whole point, her beam work really boosting her score, as with 14.250 she was 1.250 ahead of the next highest scoring routine on this piece. One and a half wolf turn, free walkover linked to split jump straddle jump. Fast snappy flick layout layout, split jump half side on, then change to split leap, to back tuck series. One and a half with a tiny hop to finish, but it wasn’t just about the skills, she was clean, beautiful flexibility, and her routine looked confident, flowing well.

Alia also has the second highest AA vault score with 13.400 for a tidy full twisting Yurchenko, bars she wasn’t quite as strong as her other pieces but went through ok.
On floor she was again the top scorer of the day with 13.150. She had a big bounce back out of her opening double pike, but it was a big double pike. Two and a half twist second tumble, punch front to one and a half twist third, lovely double twist to finish. Alia’a leaps are lovely, she has great height and range. I was thinking that there was more than a little Danusia Francis about her, then spotted a couple of little choreographic touches we saw from Duansia at UCLA, so perhaps she has been working with her, and the style suits her very well.

Silver went to Ruby Stacey of Plymouth Swallows, and what a year she’s having so far. English Champion a few weeks ago, now silver AA at the British. Clean full twisting Yurchenko for the 4th highest AA vault score, plus a bonus of 0.5 added for also using  a piked Tsuk. Bars is where she really shone, 12.600 one of only two gymnasts to get into the 12’s on this piece. Toe on and off, blind in forward giant then piked Jaeger caught fully stretched. Giant half, giant full, and a full out dismount with a couple of paces to finish. Great work, and the favourite for Sunday’s bar final.
On beam Ruby starts with a flick to chest stand mount, she then has a change leap to split leap connection, and a lovely flick flick layout. If you have long lines as Ruby does, your work looks nice if you are extended with good flexibility. The one skill she did lose her form on was the free walkover, and she had a big wobble here, but did well to save it and regain her composure. Split jump half side on, and a tidy full twist to finish, She was a little tentative in places in the second half, but good routine, and 7th highest of the day. On floor Ruby opened with a nice double tuck, then change to ring through split leap full dance passage. Very well controlled double spin before the second tumble of double twist which was clean and tidy. Lovely split jump full with good extension all the way through her legs and feet, one and a half to punch front again cleanly done, just a hop on landing to finish.
Well done Ruby, she’s proving to be quite the competitor this year. 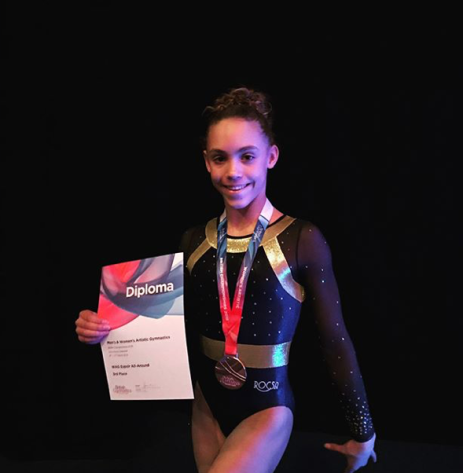 Bronze went to Maddie Roberts of Greenwich Royals, Maddie is presently the only Espoir in the British Junior squad, and AA bronze on a day where she didn’t compete to her best shows you why. She did have a couple of falls today, but she also had 2.4 in bonus, quite some way ahead of the rest of the field in that department.
Vault went very well, the highest AA vault score of the day for her lovely flighty handspring front, Maddie took advantage of the bonus for using two different groups with salto, as she also competed a straight Yurchenko. The bonus is added to the AA score, she gained herself an extra 0.5 here.

On bars Maddie fell on her very high piked Jaeger, but still scored well enough to make the bars final. She picked up bonus for pre vertical half turn in a cast to handstand. and her double tuck dismount without touching her legs to pull it round.
Maddie picked up 0.7 in bonus on beam, she has some big skills here. Flick to chest stand mount, change leap to W jump, then an absolutely solid flick layout layout. Free cartwheel, and then going for the bonus on the double spin, she counted a fall. Double tuck to finish, and it would have still been just enough to get her into the final were it not for getting hit with the 1.0 deduction for not showing leap with full 180° split. There were a few gymnasts hit with this one today.
On floor, Maddie opened with a new double wolf turn, then good double tuck well landed. Split full through to change half, then second tumble of two and a half to punch front she wasn’t at a good angle from the two and a half causing her to land the front very low. Maddie did well to fight back to standing rather than fall. Lovely whip double twist final tumble, and a jump full turn to finish
So not her best day, but a mark of her ability and potential to still take bronze, and make three apparatus finals.

Rounding off the top six, two of the new squad of Welsh gymnasts to enter the Espoir ranks. Sofia Micalleff placed 4th, and Mali Morgan 5th. Sofia has made VT, UB, and FX finals, and Mali the beam final. I haven’t caught up on all the video yet as there are so many to watch, but these girls, and their Welsh team mates are very impressive. They will be joined in apparatus finals by Poppy Stickler on beam, and Jea Maracha on bars. I hope we will see Jea, she had to come off floor after her second tumble as she was injured, everything crossed that it was not seriously.

Bryony Ludlow of De Mond on Jersey placed 6th. I’ve watched her floor and it was absolutely beautiful. Clean work elegantly performed, really my type of floor worker, and we will see her back for the final on Sunday as she qualified second.

A few of routines I have seen, Paige Moroney did have a fall on floor taking her out the final, but she is an absolutely huge tumbler in the making. One of the smallest gymnasts, who can absolutely launch herself getting huge height. Tiny little dark haired power pack, remind you of anyone?
Alice Sumners finished 10th AA, after a couple of falls on her strongest piece beam, then did really well on floor to finish third and make the final, as did Teegan Milligan who made the final in 4th.
Lucy Lewis and Sophia Cabrera impressed on bars, particularly in their closed bar elements which are so so sharp and snappy.

Congratulations to everyone taking part, a huge achievement. I very much look forward to watching all routines. For those that have finals on Sunday, good luck and may you be at your very best!