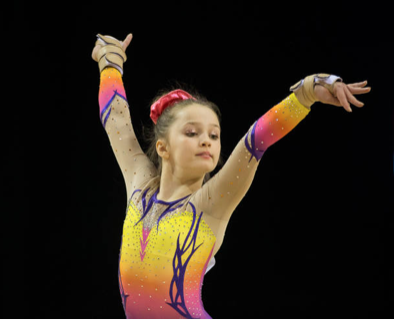 The final day of competition for the British Espoirs, apparatus finals. Top eight on each piece from the AA back to contend for the honour of being a British Championships medalist. 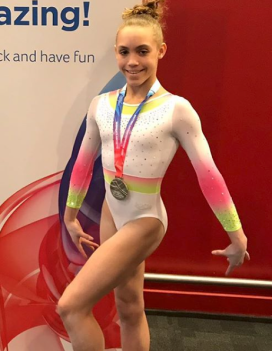 A little confusion to kick the results off. Alia Leat was crowned Champion, with Maddie Roberts second, and Ruby Stacey taking bronze. The results looked like this: 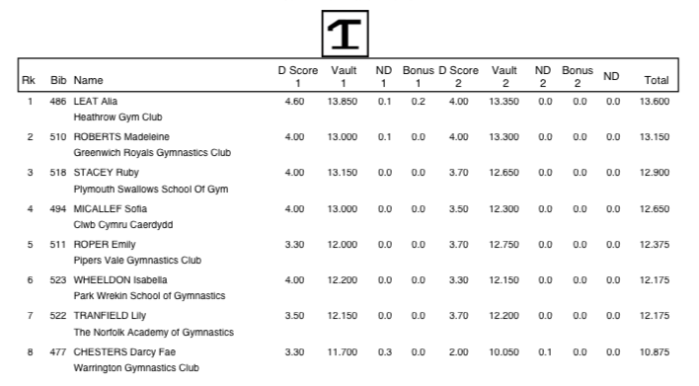 Maddie’s club Greenwich Royals have since posted on social media that Maddie was the winner today, as her total was actually 13.650, and there was a technical issue with her score. Given that there is a 0.5 difference between her recorded score, and her new total, it seems that Maddie wasn’t awarded the 0.5 bonus that Espoirs can gain for performing vaults from different groups. If that is the case, six of the eight finalists performed vaults from different groups, and it doesn’t look like the bonus was awarded to any of them.

So, if that is the case, the vault results would look like this, which may or may not be right! 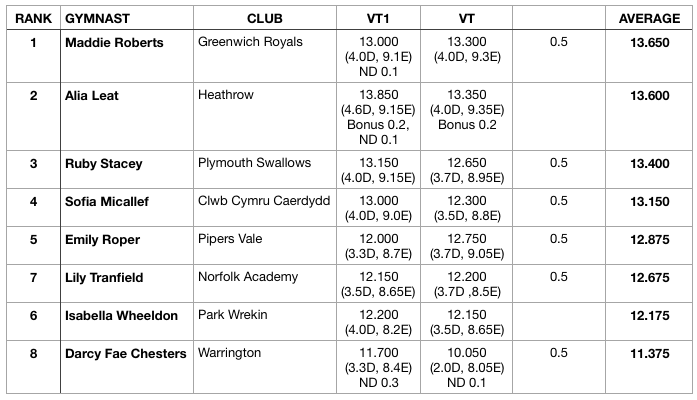 Maddie Roberts of Greenwich Royals competed a tidy handspring front with a pace, and a lovely stretched Yurchenko with the tiniest of hops.

Ruby Stacey of Plymouth Swallows. A nice straight Yurchenko from her, followed by a piked Tsuk.

*Since posting British Gymnastics have announced that as there was a misrepresentation of the new Espoir vault rules, both maddie and Alia will share the title which seems like the best outcome. 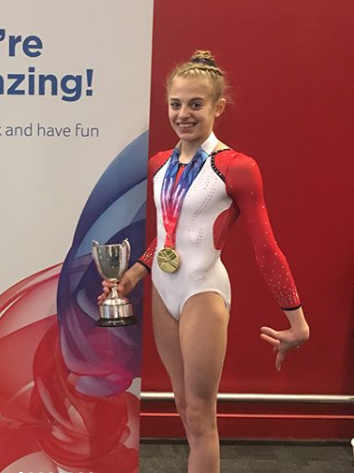 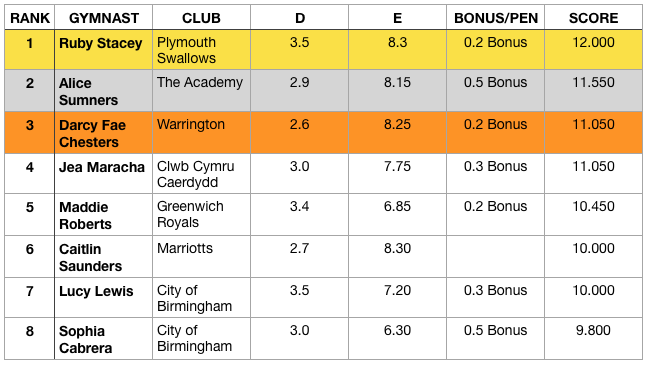 Clear results on bars, Ruby Stacey of Plymouth Swallows added bars gold to her AA silver. Higher D and E scores made her champion. Toe on, blind in to forward giant, then a lovely stretch to drive into the swing down to the piked Jaeger which she caught a little close today, but no major problems. Nice cast to handstand, clean stretched lines through the giant half and the giant full, high double tuck with the tiniest pace to the side, hands not touching her legs for the 0.2 GB bonus at Espoir level, great routine Ruby.

Alice Sumners of The Academy took silver, she was a little short on her clear circle to handstand, then from the following giant, she really controlled the transition to the toe on well, and it came out right on top of the bar. Stalder, giant full, blind in, top out, and a really high double tuck with a little hop to finish. 0.5 in GB bonus for Alice, 0.2 for the double tuck without using her hands, 0.3 for using the three different root skills. Well done Alice.

Darcy Fae Chesters of Warrington took bronze, a very fast and efficient routine from her. Clear circle to handstand with a really fast snap in to the handstand which looks like a great base to build releases from. Quick hand movements through the giant full, and a very quick shift over the bar in her long swings. Hands free tidy double tuck to finish gaining her the 0.2 bonus, and I’ll definitely be keeping an eye on how Darcy’s bars develop from here as really like the attack she has whilst remaining in complete control.

A lot of nice bar workers in this final, it didn’t go everyone’s way today, but there is a lot of promise for the future here. Great shapes, snappy close bar work, clean swings, stretched casts, dynamic swinging, very encouraging. 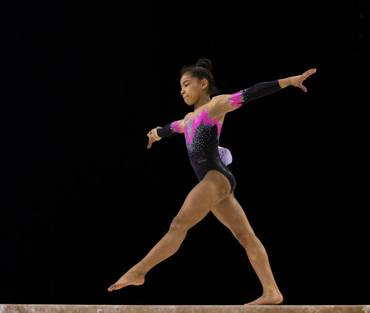 Heathrow’s Alia Leat took the beam title to add to her AA title. One and a half Wolf turn to open, free walkover split jump straddle jump all impressively executed. Fast snappy flick layout layout, the tiniest adjustment dealt with like a seasoned competitor. Absolutely solid on the side on split half, and she looks from the angle we see it to have hit full split, not a surprise given the level of Alia’s flexibility. The change half to split leap to back tuck she had a bigger wobble on, but brought it back under control. One and a half twist with biggish hop forward to finish, highest D and E scores, another very good routine from her. 0.6 in GB bonus, 0.2 for the free walkover to split jump, 0.2 for the flick layout layout, and another 0.2 for the free walkover split jump straddle jump. Alia is an impressive beamer already with the potential to be a great one.

Wales’ Mail Morgan took silver, the second highest D and E, plus a huge 0.9 in GB bonus. Change leg to split leap to split jump with lovely range and extension for 0,2 bonus, back roll to handstand flick layout which I loved, because I love anything different. Another 0.2 for that series. The double spin she did have a big wobble on it, but saved the skill, and got herself a big 0.5 in GB bonus. Free walkover, a little adjustment, then some choreography before the free cartwheel so she may or may not meant to have joined them. A very clean full twist to finish, and another beautiful beam worker in the making.

Another medal for the young Welsh team, bronze for Poppy Stickler. Flick to chest stand mount, then change leap to split leap, to straddle jump. Nice light flick layout, tiny drop of the shoulder, but nothing she wasn’t in control of. Safely through the full spin and the free cartwheel, she hit a really good split position on the side on split jump half, had bit of a wobble at the end, but dealt with it well. Stuck full twist to land, well done Poppy, Wales are looking very strong for the future.

Alice Sumners for The Academy stepped up to take the floor title with a brilliant performance. Double Wolf turn to open, high double tuck with a small pace opening tumble. Two and a half twist to high punch front, toes just squeezed in the floor area. Change to ring through to split full, clean and dynamic, then change half before her final tumble, one and a half twist joined to full twisting straight front. Alice bubbled with energy and infectious enthusiasm throughout the entire routine. The music and choreography suiting her perfectly, she smiled throughout, projected and emoted which made me smile throughout too. Well done Alice, a very deserved British Champion.

Alia Leat took yet another medal, silver this time for her floor routine. Popa jump with legs way over split, huge double pike very well landed. Gorgeous change to ring through to equally gorgeous split full, two and a half twist with a small hop second tumble. Punch front round off fast clean one and a half twist, double twist to finish. Alia has been so impressive this Championships, so stylish, so elegant, so clean. A real gem for now, and real a potential star for the future.

Congratulations to everyone taking part today, its been an intense few months for this age group with those in level 2 last year competing at national finals in November, needing to pass Compulsory 1 to qualify here just a few weeks ago, as well as for many the English Espoirs. For the second years, British Espoirs in its former slot back in December, then the English, then here. I hope you all enjoy a little down time, then some fun working new skills and upgrading routines before we see you out on the competition floor again.