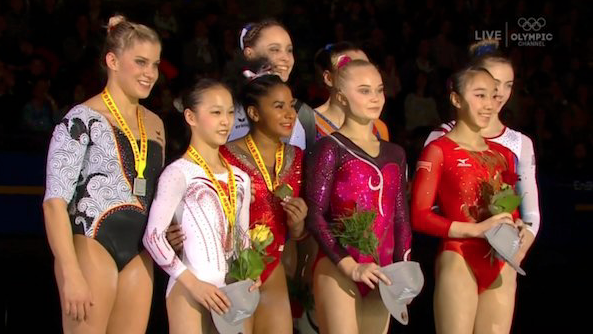 The second of the 2018 World Cup events in terms of the British WAG, and this time City of Liverpools’s Lucy Stanhope travelled out to Stuttgart in Germany. A week before she was expecting to compete, as she was originally scheduled for the Doha World Cup next weekend, Lucy came in for Georgia-Mae Fenton.

This was not only Lucy’s first international in 16 months since she competed as a junior at the 2016 International Gymnix, but of course her first senior international event, so a big step up. She’s recently competed at both the English and British Championships in quick succession, but really is coming back to competition, as I don’t recall or have record of her competing for a year prior to the English a few weeks ago.

Lucy has come into 2018 looking a though she has grown a fair bit since we last saw her, she is deceptively powerful, and has a lot of new skills added to her routines that she is testing out.

It was a tough day for nearly everyone out there today, with only gold medalist Jin Zhang having a clean competition without at least one fall. Everyone else came away from the apparatus at least once, although to be fair, silver medalist Elizabeth Seitz did manage to stay on the beam, but she had both hands down grabbing it to stop herself coming off.

You can view the entire competition here:

Starting on vault, and Lucy brought her big upgraded double twisting Yurchenko. Unveiled at the English Championships, repeated at the British, this new vault is very impressive, and has been appreciated by gymnastics fans worldwide. Lucy’s extra height really suits this vault as she maintains her stretch so well throughout, really just closing the shape in a little as she comes into land. Good distance, Legs stretched and together, clean twist, no crossed feet, landed bang on the centre line with a hop back and a small hop to the side. A strong score even with a little in deduction on the landing from the judges today, which just shows that the scoring potential for this vault is absolutely huge, and rightly so as it’s that well performed.
In addition to great vaulting, best finishing vault or any other piece, of the year face so far, loved it!

Bars, and more upgrades for Lucy this year. Instead of a shoot half into shoot to high bar, she now has a Bhardwaj to low bar, and a Van Leuween back to high bar, so has traded a D and a B for two E rated skills. The Bhardwaj didn’t come off today, her right hand slipping forwards over the low bar on the recatch, and once that happened nothing she could do to save the skill. Fortunately she wasn’t hurt, probably knocked herself a little, but she was able to remount the apparatus, complete her new van Leuween, and finish with a lovely high double front where she had fast rotation, and so much room, that I think we may see yet another E skill added to her bars with a half out from the dismount.

Beam was tough on nearly everyone today, only two clean routines in the field. Again Lucy has upgraded, she tried her new straight back somersault mount, didn’t come off for her here, but this is a big F rated skill when it does, at it looked great at the English when she hit it. Full twisting flick, then the flick layout, a wobble on the landing of the layout, a little nervy perhaps. Free walkover, lovely change leap, then the change to side, well landed. Full spin, and FULL appreciation from me for finishing and extending her leg from the spin before her heel hit the beam, as I love to see control like that. The new split jump half which is the jump for 2018 beams took her off the beam again, she didn’t have her weight over the beam on landing so there wasn’t an awful lot she could have done there to stop the fall. Very tidy two and a half twist to finish, such a clean and efficient twister. We’ve also seen a very nice standing full from Lucy in training on this piece so I look forward to seeing that in the future.

Finishing on floor, high piked full in to open, she did bounce back out with both feet so had to take the 0.3 deduction. Change leap through to well, we’ll never know as the feed cut to floor level at the back of the arena! Most likely the split leap full though, as that is what she has been using this year. More beautiful twisting from Lucy, a very clean two and a half twist to straight front, then change leap with three quarter turn. Two big doubles to finish, high double tuck third tumble with so much time in the air, then again on the double pike, plenty of height, just a pace on landing

So a mixed day for Lucy overall in her first senior international, but much to be pleased with, and I’m sure much to be learned from. For me, a lot of potential here, a lot of new found power, a lot of new skills, and some very big upgrades. Its going to be very interesting to watch Lucy from here as she continues to consolidate these new routines, as well as add to them. Not all new seniors explode onto the international scene from the off, some grow and progress into their stride over a couple of years. Lucy is just at the beginning of her second senior year, and really looking as though she’s ready to push forward now to make huge progress in the senior ranks. 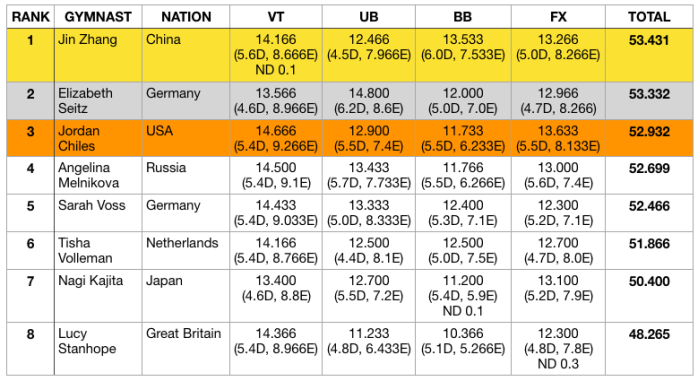 One thought on “2018 Stuttgart World Cup”

There was an error retrieving images from Instagram. An attempt will be remade in a few minutes.